CABSAT 2018: Rohde & Schwarz develops IP-based DTH platform for ONT Tunisia | Satellite | News | Rapid TV News
By continuing to use this site you consent to the use of cookies on your device as described in our privacy policy unless you have disabled them. You can change your cookie settings at any time but parts of our site will not function correctly without them. [Close] 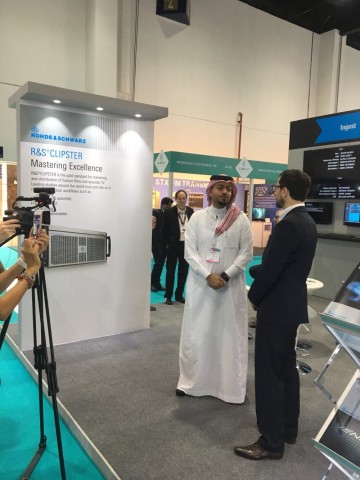 The direct-to-home (DTH) platform — which Rohde & Schwarz has designed, installed and commissioned — is claimed to not only meet all of ONT’s current TV broadcast needs but also future-proof its business expansion strategy by virtue of its IP basis. It also enables Tunisian and regional broadcasters to have a direct access from Tunis to the growing 26°E neighbourhood with a coverage encompassing MENA and Western Europe. The deployment is the result of the agreement by Arabsat and ONT in February 2017 to launch a Tunisian broadcast platform on Arabsat Badr-4 at 26°E, which became fully operational in October.

In the project, Rohde & Schwarz has installed its R&S AVHE100 encoding and multiplexing solution supporting the transmission of ten standard-definition (SD), two high-definition television (HDTV) channels and 24 radio stations. The AVHE100 encoding and multiplexing solution is fully IP-based, which says R&S creates significant efficiencies in terms of space and power saving. The solution can encode in MPEG2 and MPEG4 today and a future transition to HEVC, and Ultra HD is possible with the addition of new software systems and minimal extra hardware.

With the project, Arabsat says that it has developed a strategy that will see significant expansion of the DTH platform, bringing many new services to market in the near future and catering for new service provision as required by ONT and Arabsat.
Tweet