MENA pay-TV revs set to fall in 2018 | Pay-TV | News | Rapid TV News
By continuing to use this site you consent to the use of cookies on your device as described in our privacy policy unless you have disabled them. You can change your cookie settings at any time but parts of our site will not function correctly without them. [Close]

As competition ramps up, the Middle East and North African pay-TV market is set for a tough 2018 according to the latest regional survey report from Digital TV Research. 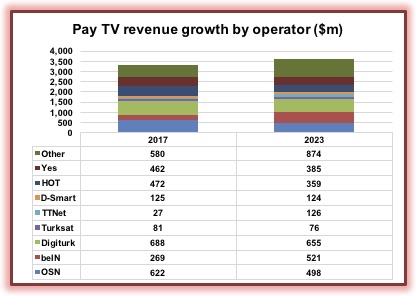 The eighth edition of the Middle East and North Africa Pay TV Forecasts report calculates that the MENA pay-TV market will be worth $3.62 billion in 2023 — up by only 7.8% on 2017 — with, and more notably, a fall in revenues in 2018. Digital TV Research expects regional revenues to be flat in 2019 before starting a slow recovery.

Overall, pay-TV revenues are forecast to grow by 24% from $1.18 billion in 2017 to $1.46 billion in 2023, despite pay-TV subscriptions rising by 47% over the same period to 5.84 million. Digital TV Research made the point that that if subscriptions are growing faster than revenues, then ARPUs must be falling.

Looking at individual companies, the analyst noted that moves by Al Jazeera subsidiary beIN have hit long-established rival OSN. OSN benefits from exclusive long-term deals with all of the Hollywood studios. However, OSN has struggled to push its subscriber base much beyond one million subscribers. The analyst calculated that OSN’s revenues will reach $498 million in 2023 – down from $700 million in 2015. Digital TV Research expects beIN’s revenues will exceed OSN’s in 2022, doubling between 2016 and 2023 and that the company will overtake OSN by subscriber numbers in 2018. beIN is forecast to have 1.87 million satellite TV subscribers by 2023 – ahead of OSN’s 1.46 million, excluding subscribers to their channels on other platforms such as IPTV and cable.

“The [MENA] region has always been difficult for pay-TV, with many homes receiving many FTA channels and rampant piracy being commonplace,” said Simon Murray, principal analyst at Digital TV Research. “beIN is shaking up the market with its strong slate of exclusive sports rights. beIN is now providing more entertainment content.

“Competition is increasing – not only from beIN, but also from the multitude of SVOD platforms that have launched in recent years. These platforms compete more directly against OSN than beIN due to their emphasis on drama. No SVOD platforms can compete against beIN with live sports provision. OSN’s reaction was to cut its subscription prices substantially in February 2017. Digital TV Research believes that further cuts will be made as OSN struggles to hold on to its subscriber base until its fees are just above beIN’s.”

The report also forecasts that beIN’s sister company Digiturk will retain regional market leadership despite more intense competition in Turkey while Israel will experience cord-cutting. It believes that Israel will lose 27,000 pay-TV subs between 2017 to 2023and that he country’s pay-TV revenues will fall from more than $1 billion in 2015 to $767 million in 2023 as cheaper over-the-top (OTT) platforms force traditional pay TV operators to lower their fees.
Tweet