Saudi Arabia prepares for post-ban cinema screenings | Programming | News | Rapid TV News
By continuing to use this site you consent to the use of cookies on your device as described in our privacy policy unless you have disabled them. You can change your cookie settings at any time but parts of our site will not function correctly without them. [Close]

Saudi Arabia’s first cinema brand CINEMA 70 is set to screen Captain Underpants and the Emoji Movie in Jeddah, as the kingdom gears up to relaunch movie theatres nationwide. 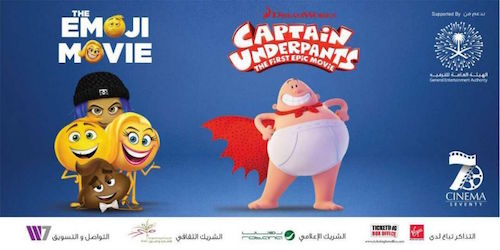 The six-day family movie festival, supported by the country’s General Entertainment Authority, will be held from 12 January at the Jeddah Culture and Arts Society.

Mamdouh Salem, a Saudi director and producer who oversaw the organisation of the first Saudi film festival in 2006, is CEO of CINEMA 70.

In December, US cinema chain AMC Entertainment signed a deal to build and operate movie theatres in Saudi Arabia. The agreement will see the company form a joint venture with Saudi Arabia’s Public Investment Fund.

The moves follow the lifting of a decades-old ban on cinemas as part of a far-reaching liberalisation drive by Saudi Arabia’s Crown Prince Mohammed bin Salman. The first movie theatres are expected to open in March.
The lifting of the ban has been welcomed by 80% of local residents, according to a Kantar TNS survey. Some 67% of respondents said they intend to visit cinemas once they open.

Saudi Arabia is expected to have more than 300 cinemas by 2030, stimulating an industry that would contribute US$24 billion to the economy, according to the country’s culture ministry.