TV sets remain as prime device for VOD viewing | VOD | News | Rapid TV News
By continuing to use this site you consent to the use of cookies on your device as described in our privacy policy unless you have disabled them. You can change your cookie settings at any time but parts of our site will not function correctly without them. [Close]

The number of alternatives to traditional TV is growing rapidly, but even when it comes to the burgeoning on-demand sector, the way in which we access these new services has not changed that much, according to data from UK measurement firm BARB. 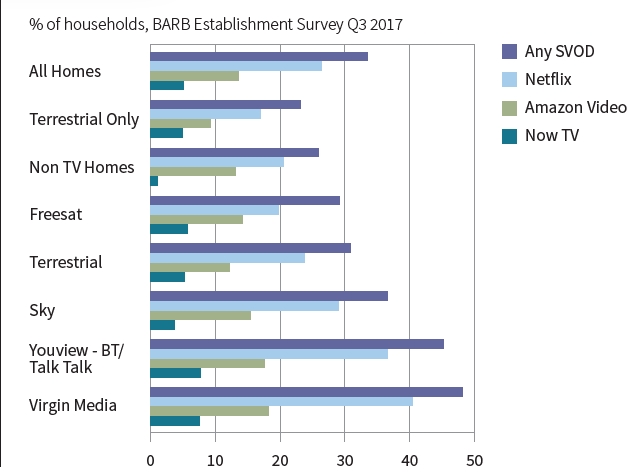 In a new white paper, The SVOD Report: Charting the growth in SVOD services across the UK, BARB found that in a world of fragmentation traditional TV viewing is declining with, by the end of 2016, the average person watching 216 minutes daily of traditional consolidated TV (live and viewed within seven days of broadcast), 2% less than at the same time a year earlier. However, the total amount of time spent in front of the TV was unchanged.

BARB attributed the reason for this apparent disconnect is that a fast-growing area of activity in the UK is unmatched viewing, defined as viewing programmes 28 days or more after broadcast and non-broadcast viewing including subscription video-on-demand (SVOD) activity. BARB calculates that unmatched viewing accounted for around 16% of all TV set activity in 2016, and this figure has peaked at over 20% in recent months. Even though it apportions a significant amount of this activity to games-playing on a console, the rest ranges from archive playback of PVR recordings over 28 days old, to DVDs and, most importantly, to watching programming via SVOD services.

BARB also noted that in the UK, people are increasingly investing in larger and larger TV sets. It believes that more than half of all UK households have a TV of at least 40” and 16% of homes have a set of at least 50”. Moreover, people were getting more use from them: in 2016, daily total TV set viewing by individuals was four hours 12 minutes on average.