Pay-TV subscribers soar in sub-Saharan Africa | Media Analysis | Business | News | Rapid TV News
By continuing to use this site you consent to the use of cookies on your device as described in our privacy policy unless you have disabled them. You can change your cookie settings at any time but parts of our site will not function correctly without them. [Close]

The number of sub-Saharan pay-TV subscribers is expected to reach 40.89 million by 2023, a 74% rise on 2017 figures, according to a study by Digital TV Research. 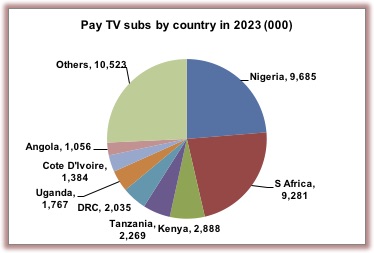 “Pay-TV competition in Sub-Saharan Africa is becoming more and more intense, especially given the launch of Kwesé TV in 14 countries during 2017,” said Simon Murray, principal analyst at Digital TV Research.

“Pay-TV operators in most countries have lowered subscription fees and/or subsidised or given away equipment as competition intensifies. By no means are all of the existing pay TV platforms are expected to survive in the long run. Having said that, several pay-TV operators are booming.”

By 2023 Nigeria will be home to the largest number of pay-TV subscribers in sub-Saharan Africa, overtaking the current leader South Africa in 2021. By 2023, the eight largest pay-TV markets in the region will account for three quarters of the overall subscriber number.

Naspers-owned pay-TV operator MultiChoice remained the largest player across sub-Saharan Africa in 2017, with a total of 12.48 million subscribers across its satellite TV platform DStv and DTT platform GOtv. This figure will expand to 16.66 million by 2023, according to Digital TV Research.

France’s Vivendi had 2.96 million subscribers to its Canal Plus satellite TV platform and Easy TV at the end of 2017; a figure forecast to climb by nearly two million to 4.87 million by 2023.

China’s StarTimes or StarSat pay-TV platforms will enjoy the most impressive growth: from 6.23 million subscribers at the end of 2017 to 13.42 million by 2023. This equates to half of MultiChoice’s total in 2017 growing to 81% of the customer base of its South African rival by 2023.