Record number of OLED TVs shipped at end of 2017 | 4K/UltraHD | News | Rapid TV News
By continuing to use this site you consent to the use of cookies on your device as described in our privacy policy unless you have disabled them. You can change your cookie settings at any time but parts of our site will not function correctly without them. [Close]

Record number of OLED TVs shipped at end of 2017

Even before the products enjoyed what is the traditional spike in sales in the run up to the Holiday period, organic light-emitting diode (OLED) TVs enjoyed unprecedented demand at the end of 2017 according to research from IHS Markit. 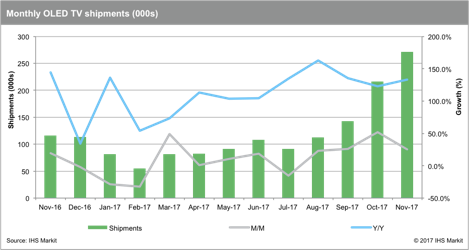 Yet the analyst found that in November 2017 worldwide OLED TV shipments more than doubled year over year, as brands responded to peak holiday demand from retailers. It added that with consumer television prices falling, global shipments of organic light-emitting diode (OLED) TVs grew 133% year-over-year, reaching a new monthly record of 270,000 units in the month. This growth comes as falling prices placed 55-inch 4K OLED into the budget range of a greater number of high-end holiday shoppers Total OLED TV shipments from January through November 2017 surpassed 1.3 million units. Together with December estimates, overall OLED TV shipments are likely to exceed 1.4 million units shipped in 2017.

The IHS Markit TV Sets Intelligence Service-Premium research also found that LG Electronics (LGE) dominated the OLED TV market in 2016, accounting for around 92% of all units shipped, while several Chinese brands accounted for most of the remaining shipments. During the weeks surrounding Black Friday 2017, LGE dropped the price of its entry-level B7 series 55-inch and 65-inch 4K OLED TVs by $200, pricing its lowest tier 55B7 model at $1,499. LGE led overall OLED TV shipment volume in November, with a 31% month-over-month increase in shipments. Total year-over-year 55-inch OLED TV shipments rose 123% in November, while 65-inch shipments grew 157%.

Looking at the overall flat panel market, IHS Markit found that global liquid crystal display (LCD) TV shipments in November declined month over month by 1.6%, falling to 24.4 million units, as Black Friday demand in the United States declined in 2017 compared with the prior year.
Tweet