Limelight predicts burgeoning business for CDNs throughout 2018 | Infrastructure | News | Rapid TV News
By continuing to use this site you consent to the use of cookies on your device as described in our privacy policy unless you have disabled them. You can change your cookie settings at any time but parts of our site will not function correctly without them. [Close]

In expectation of a booming market for services such as it delivers, Limelight Networks has expanded its global content delivery network egress capacity to 28 Tbps, an annual rise of 39%. 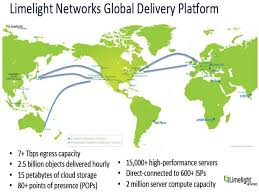 Limelight says that the investment supports its long-term focus on expanding in key countries across the globe. Over 2017, Limelight has added eleven new points-of-presence (PoPs) in countries including Brazil, Canada, France, India, Italy, Spain and the US, and has upgraded more than 20 locations worldwide to address market demand for CDN services and capabilities. Limelight now caches digital content across over 80 PoPs around the world.

Altogether, Limelight has increased the average server capacity by 175% and claims to have also reduced power consumption at the same time. In addition to the global network expansion, it claims that proprietary software and network upgrades have reduced the company’s carbon footprint by nearly 1,600 metric tons of carbon dioxide and reduced power costs by 10% this year alone.

“Continued investment in our network and software is paying off, resulting in broader coverage, greater capacity, increased network performance, and a superior quality of experience for our customers,” said Limelight Networks senior vice president of operations Dan Carney at. “Our unique assets include scale, footprint, reliability, security, and connectivity, which make Limelight one of the highest performing options for delivering online content and addressing edge-computing requirements.”