Three-quarters of US consumers would buy products through TVs | Media Analysis | Business | News | Rapid TV News
By continuing to use this site you consent to the use of cookies on your device as described in our privacy policy unless you have disabled them. You can change your cookie settings at any time but parts of our site will not function correctly without them. [Close]

Three-quarters of US consumers would buy products through TVs

Even though Americans are highly interested in purchasing products directly from TV commercials and programmes using their remotes, many don’t realise the capability currently exists, says a new t-commerce study from Connekt. 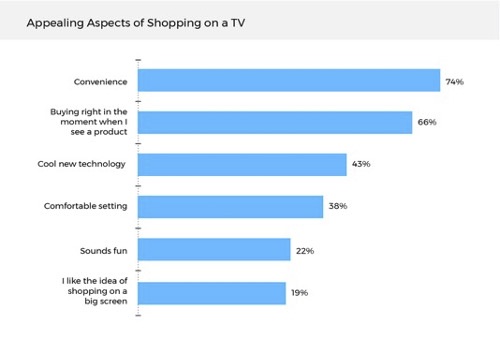 Looking at t-commerce in general, Connekt found that convenience ranked first, cited by 74% of respondents, while the ability to buy right when they see a product they like ranked second with 66%. Also high on the list were the appeal of a cool new technology, and the ability to purchase from a comfortable setting. When asked which products they’d be most likely to buy from their TVs, 76% said household goods such as cleaning supplies and cosmetics. Consumer electronics was a close second with 67%, followed by clothing with 47% and home and garden with 44%.

The study revealed that prospects for t-commerce sales in 2018 were favourable with nearly half (42%) of those surveyed said they will likely buy products through their TV in 2018. Moreover, the study showed a strong consumer appetite for buying goods through the largest screen in the home, with 76% saying they would shop through their TVs in real time if it were an option. A clear majority, almost two-thirds, would be most likely to purchase products highlighted in TV ads, whereas just over a third would be most inclined to purchase those featured in TV shows.

“TV remains the most prolific way for brands to reach consumers, and smarter TVs mean smarter advertising where brands can move consumers from awareness to a transaction without ever leaving their TVs,” said Connekt senior vice president Tripp Boyle.

Yet even though it said that there was undeniable interest in t-commerce, Connekt cautioned that consumers were still figuring out how to engage with TV content and make purchases through their connected devices in real time. Indeed, 78% of those surveyed said they’re not familiar with technology enabling them to buy products using their TV remote.