Mobile video ad spending almost doubles worldwide | Ad Tech | News | Rapid TV News
By continuing to use this site you consent to the use of cookies on your device as described in our privacy policy unless you have disabled them. You can change your cookie settings at any time but parts of our site will not function correctly without them. [Close]

Research from Smaato has shown the power of video within mobile advertising, highlighting the increasing dominance of in-app advertising over mobile web in overall worldwide mobile ad spending and also delves into the explosive growth of mobile video. 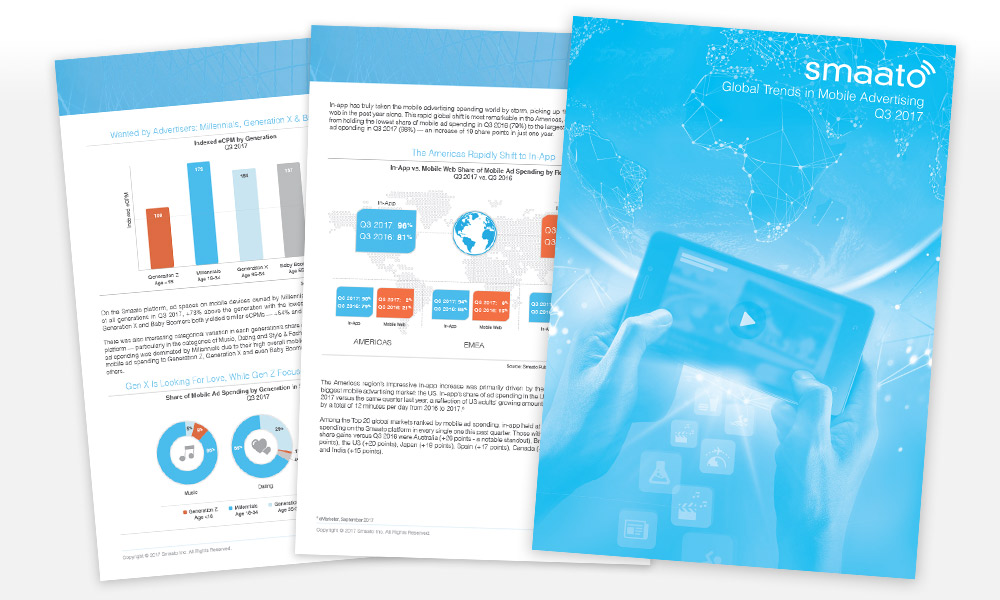 The global real-time advertising platform provider’s company’s Q3 2017 Global Trends in Mobile Advertising Report, analysed over 1.5 trillion ad impressions delivered on the Smaato platform in Q3 2017. The data showed that consumers were now spending over 80% of their smartphone time in apps worldwide, in-app advertising continued to be the main growth engine of worldwide mobile ad spending. Yet again in Q3 2017, in-app set a new ad spending share record on the Smaato platform, accounting for 96% of global ad spending.

Smaato said that the continued shift toward in-app and away from mobile web was a global phenomenon, with in-app garnering at least 85% of mobile ad spending in each of the top 20 mobile advertising markets worldwide.

The other key trend revealed in the Q3 2017 Global Trends in Mobile Advertising Report was that video ad requests were ‘skyrocketing’, with mobile video ad spending growth continuing to outpace that of all other mobile ad formats. Video ad spending almost doubled, that is over 90% growth. in one quarter alone. Ad spaces that played mobile video ads earned 4.1 times higher eCPMs on average than those with non-video ad formats.

“Although in-app advertising already became more than three quarters of the worldwide ad spending on our platform last year, there was clearly still more upside, as in-app established its global mobile ad spending dominance in 2017,” said Smaato CEO and co-founder Ragnar Kruse. “Given consumers’ pronounced shift to in-app over the past year, it is not surprising that advertisers followed, especially considering the significant targeting precision and tracking accountability advantages that in-app advertising give advertisers versus any alternative — whether mobile web, desktop or traditional television.”