RT begins operations in France | Broadcast | News | Rapid TV News
By continuing to use this site you consent to the use of cookies on your device as described in our privacy policy unless you have disabled them. You can change your cookie settings at any time but parts of our site will not function correctly without them. [Close] 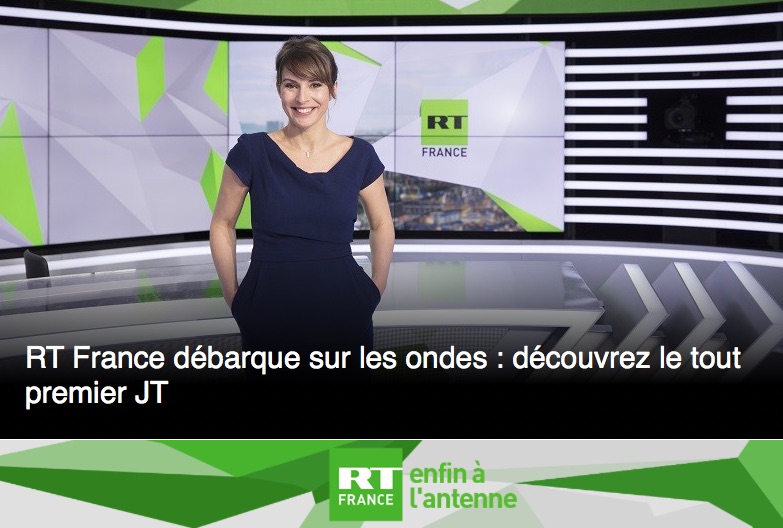 Weeks after its glitzy coming out party at MIPCOM 2017 in Cannes, the latest offering from the RT global TV news network has begun operation in France.

Dedicated to the French-speaking world, the new RT France network will air programming from its new studios in Boulogne-Billancourt, the broadcasting hub just outside Paris, which is also home to TF1, LCI, France 24, RFI, Canal+ and CNews.

RT France will feature a mix of live news, documentary content, debates, interviews and original programming, covers the local, regional, national and international stories most affecting the Francophone world. RT says that its latest local-language subsidiary will stay true to its fundamental principle of ‘question more’, and will aim to shed light on the issues and points of view that have traditionally been overlooked by the other French-language television networks.

Talent lined up for RT France includes former lead anchor for BFM TV, Stéphanie de Muru; economic journalist Jean-Marc Sylvestre, who has previously reported for TF1, LCI, i-Télé; and Atlantico, will host a weekly debate show called The Eco Lab where he will face off against economist and director of studies at the School for Advanced Studies in the Social Sciences Jacques Sapir.

In addition to broadcasting to most countries with a large French-speaking population, including Belgium, Canada and those in the Mediterranean, RT France is available online at rtfrance.tv.

Speaking about the channel, head of RT France Xenia Fedorova commented: “France is a country with a storied legacy of respect for the freedom of expression and embrace of new ideas. We have created a platform dedicated to profiling the widest range of opinions in France and beyond. RT France will enable the audiences to explore this diversity and hear the voices rarely found in the mainstream media.”