FAANG firms to sink teeth into tenth of total US TV and video revs in 2018 | Media Analysis | Business
By continuing to use this site you consent to the use of cookies on your device as described in our privacy policy unless you have disabled them. You can change your cookie settings at any time but parts of our site will not function correctly without them. [Close]

Analyst Ovum has released a number of bold predictions for the forthcoming year in the US TV industry, with the fundamental trend being the continued transformation of TV and video by over-the-top (OTT) technology and services. 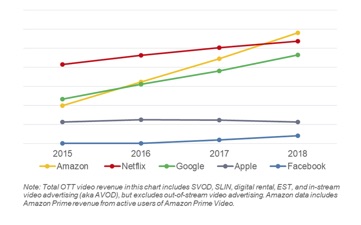 The analyst predicts that in the world’s most advanced TV and video market, companies such as Netflix, Amazon Video, YouTube and other online-only services will account for 18% of total paid and ad-supported TV and video revenues in 2018, making up a staggering 60% of growth.

Moreover, the OTT sector is expected to see what Ovum calls ‘astonishing’ 98% growth, while the so-called FAANG companies — Facebook, Amazon, Apple, Google, and Netflix — are set to account for 9% of total US TV and video revenue in addition to 64% of revenue growth. Ovum attributes the forecast FAANG growth partly due to the saturation of traditional TV in the country, but also to their growing domination of the OTT video market. Amazon and Netflix are projected to attract 69% of OTT subscription revenue, while Google and Facebook are expected to command as much as 45% of OTT in-stream video advertising, advertising-funded video-on-demand (AVOD), spend.

In a hugely bold prediction, Ovum predicts that Amazon will generate more revenue from OTT video than Netflix in the US in 2018, calculating that due to its growing array of ways to pay for video – subscriptions, digital rentals, electronic sell-through (EST) and bundles of third-party TV apps – it will attract $5.8 billion in video-related revenue in the US in 2018. By contrast, it calculates that Netflix’s subscription-only model will generate $5.3 billion. In making its calculations, Ovum stress that it includes fees from Amazon’s ever-growing Prime bundle. But maybe that’s the point. Rules are meant to be broken and Amazon is the most daring offender.

Furthermore, and despite its increasing global expansion, most recently in Greece, Ovum does not believe that Netflix will enjoy a majority of OTT video subscribers in at least 19 countries by the end of 2018. Ovum says that its rivals share no single strategy in common, with various offerings from pay-TV operators, broadcasters and local start-ups beating the US-based subscription video-on-demand (SVOD) giant to the top spot. The analyst regards key success factors as including first-mover advantage, exclusive local content, live programming and more affordable pricing, especially in developing markets that differ greatly from the US.

Despite attracting a lot of media attention and international in the year, Facebook Watch is regarded as being set to make only minimal impact in 2018. Indeed, Ovum noted that Facebook’s expected share of global AVOD revenue would remain ‘negligible’ in 2018 and that Facebook would have to attract compelling local content, refine its video ad experience, and offer more robust and reliable ad metrics before it could truly compete with YouTube and other premium AVOD platforms for consumer attention and advertiser spend.

Ovum’s 2018 Predictions: Consumer & Entertainment Services report contained more optimistic news for Apple, even though it believes the CE giant will see its share of OTT video revenues in the US decline to less than 4% in 2018, caused partly by Amazon closing in on the iPhone maker’s leading position in transactional video on-demand (TVOD), but mainly by the growing popularity of Netflix and Amazon Prime Video. The analyst expects Apple to launch its own premium offering, perhaps with an Apple Music-like free promotion for users of its devices, starting in the US.