Striking producer elevated to Munhwa Broadcasting Corporation president | Broadcast | News | Rapid TV News
By continuing to use this site you consent to the use of cookies on your device as described in our privacy policy unless you have disabled them. You can change your cookie settings at any time but parts of our site will not function correctly without them. [Close]

Current affairs producer Choi Seung-ho has become president of Munhwa Broadcasting Corporation (MBC), declaring his 2012 dismissal from South Korea’s public broadcaster null and void – along with those of former colleagues. 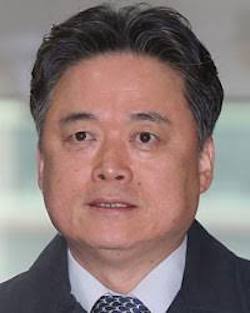 Journalists Kang Ji-woong, Park Seong-je, Park Seong-ho, Lee Yong-ma and Jeong Yeong-ha are among those also reinstated to the organisation, and confirmed in a joint statement from MBC and its labour union on 8 December.

Newspaper producer Choi Seung-ho (pictured) was selected as the new president of MBC by the board of the Foundation for Broadcast Culture (FBC), MBC’s leading shareholder. His return to MBC comes 1,997 days after he was fired from the network.

“Going forward, I will take into account your dreams and most heartfelt wishes and ensure they can be realised. I will bring about a day when MBC quickly rises again and returns to the public,” he told MBC employees, on his first day as president of the broadcast network.

About 2,000 MBC union members had been on strike since 4 September 2017, demanding the resignation of former president Kim Jang-kyom and the network’s independence from political interference.

Kim was dismissed in mid-November by a majority of directors on the FBC board, after being accused of overseeing ‘political bias’ in Korea’s second largest public broadcaster’s current affairs coverage, in favour of the former Conservative Government, headed by president Park Geun-hye.

Four FBC board members who felt Kim’s dismissal was improper have since taken legal action to challenge the decision. However, their request to overturn the decision was rejected last week by a Seoul court. The same four directors, all nominated by the previous ruling party, abstained from the vote to appoint a new president, which was carried by the remaining five directors.

Seung-ho first worked for the public broadcaster in 1986 and joined the PD Notebook in 1995, earning the Song Geon-ho Press Award and Ahn Jong-pil Free Press Award honours for investigative reporting. In 2003, he became president of the MBC labour union. He was dismissed from the broadcast network during a 170-day strike in 2012.

He has since worked as a producer for the online investigative site Newstapa and directed the documentaries Spy Nation and Criminal Conspiracy.

“It is of exceptional significance that the new president is a network member who was illegally fired five years ago during a labour union general strike to demand fairness in broadcasting,” the MBC chapter of the National Union of Mediaworkers (NUMW) said in a statement. “We look forward to a greater sense of responsibility in achieving fair broadcasting.

“As we face the historic task of restoring press freedom and democracy, we hope the union and network will both appreciate the seriousness of the final opportunity granted to MBC and do their utmost to cooperate,” it added.