LiveU observes ‘exponential’ growth in live IP video traffic | Media Analysis | Business | News | Rapid TV News
By continuing to use this site you consent to the use of cookies on your device as described in our privacy policy unless you have disabled them. You can change your cookie settings at any time but parts of our site will not function correctly without them. [Close]

Live video production specialist LiveU has released research offering what it says are insights into the massive growth in live IP video traffic in the broadcast market, reflecting the transition away from traditional satellite transmission towards cellular. 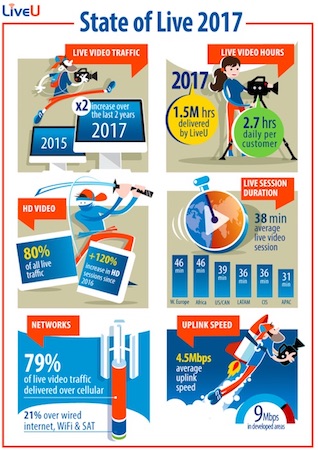 Based on data from its global customer base, which comprises over 2,000 customers in over 100 countries, the findings are also said to reveal the full extent of the surge in demand for live content, geographical differences in video acquisition behaviour and the move to high-definition.

Data traffic for live video over IP was found to have doubled over the last two years, with around 1.5 million live broadcasting hours delivered by LiveU in 2017. The average live stream per customer is 2.7 hours per day. HD 720/1080 video traffic now accounts for almost four-fifths of all traffic delivered in 2017 and an increase of over 120% in live HD sessions compared to 2016.

LiveU also saw the length of video sessions also increasing with geographical differentiations worldwide. While the average overall broadcaster/content creator live session was 38 minutes, Western Europe and Africa showed the longest average sessions at 46 minutes. Africa has witnessed a general move away from satellite to cellular bonding, with cellular often replacing satellite in some countries such as Ghana, Kenya and South Africa. This, said LiveU, can be explained by the strength of the region’s 4G networks and the lower costs offered by cellular. Some broadcasters are also creating multi-camera productions using cellular transmission units.

The data showed 79% of all bonded video now delivered over cellular networks only, with a wired Internet connection, Wi-Fi and satellite accounting for the remaining share. The worldwide average uplink speed for video acquisition has reached 4.5Mbps, with developed areas experiencing approximately 9Mbps on average.

“What stands out in these findings is the transition away from traditional transmission methods to cellular bonding,” said LiveU CEO and co-founder Samuel Wasserman. “We believe growth in 2018 will come from this transition, broadcast cloud services and HEVC. Bringing higher quality with even greater reliability to the market, HEVC enhances our technology’s use across multiple genres. We’re already seeing its use increase beyond news, with our global customers looking to deploy the LU600 HEVC solution for live sports and other vertical segments.”