Third of US web users stream video as primary viewing choice | Media Analysis | Business | News | Rapid TV News
By continuing to use this site you consent to the use of cookies on your device as described in our privacy policy unless you have disabled them. You can change your cookie settings at any time but parts of our site will not function correctly without them. [Close]

About a third of US Internet users look to online video content as their primary way to watch video, according to figures from Raymond James, reported by eMarketer. 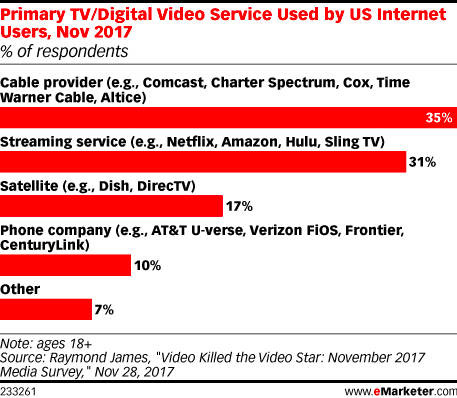 About 31% of internet users polled in November said that a subscription video-on-demand (SVOD) service is their main outlet for video entertainment. Netflix accounts for most of that: more than three-quarters (76%) of respondents named Netflix as one of the services they would pay for if they had to choose just three, based on their current budget — a success for the streaming giant that largely goes back to its original content investments, such as global hit Stranger Things.

The 31% figure is up from 24% in 2016, and almost neck-and-neck with the 35% who primarily use cable. The cable group cited access to broadcast TV channels, sports content and premium channels as their reasons for not moving to streaming services.