US content makes up over two-thirds of films broadcast on TV in Europe | Media Analysis | Business | News | Rapid TV News
By continuing to use this site you consent to the use of cookies on your device as described in our privacy policy unless you have disabled them. You can change your cookie settings at any time but parts of our site will not function correctly without them. [Close]

A survey from the European Audiovisual Observatory (EAO) looking at the origin of film content in the EU has revealed the persisting dominance of American content within the region. 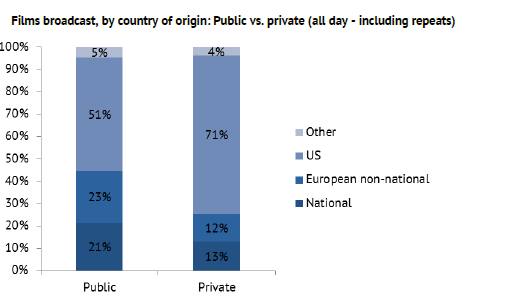 The study, sampling 131 TV channels from 18 different EU member countries, found that overall, films produced in Europe made up 28% of movies broadcast by a sample of TV channels during the 2015/2016 season. The figure breaks down into 14% for national films and a further 14% for European non-national films, indicating, said the observatory, the ‘significant’ circulation of European films. However, this drops to 23% during prime time.

Public channels tended to broadcast more European films than their private counterparts. Taking a full day on public television, the EAO found that European films accounted for 44% of all films broadcast. This figure fell to 24% for the private TV channels in the sample. Taking into account the prime time slot, these figures fall to 39% and 19% respectively.

Of the 15,504 film titles broadcast during the 2015/2016 season, 47% were produced in Europe and 47% in the US with the rest of the world making up 6%. However, the EAO noted that a difference appears when one considers that European films were broadcast in 1.4 countries in the same year, while US films were broadcast in 3.1 countries in the year studied. The circulation difference explains why European films represented 47% of single film titles broadcast while accounting for only 28% of cumulated films broadcast. The cumulated total for US films was 68%.

The European Audiovisual Observatory also found that several countries had a strong export ratio for their films, meaning that a significant proportion of the broadcasts occurred in another country of the sample: the majority of the broadcasts of films produced in Ireland, Belgium, Denmark, France, Germany and the United Kingdom happened outside the country of production.