Champions League popularity persists but rights fees, subs prices unlikely to drop any time soon | Pay-TV | News | Rapid TV News
By continuing to use this site you consent to the use of cookies on your device as described in our privacy policy unless you have disabled them. You can change your cookie settings at any time but parts of our site will not function correctly without them. [Close]

Research from Ampere Analysis has concluded that even though criticism about inflated rates emerges every time rights come up for renewal, the reality is that fans love their sports and most are willing to pay regularly to view it on TV. 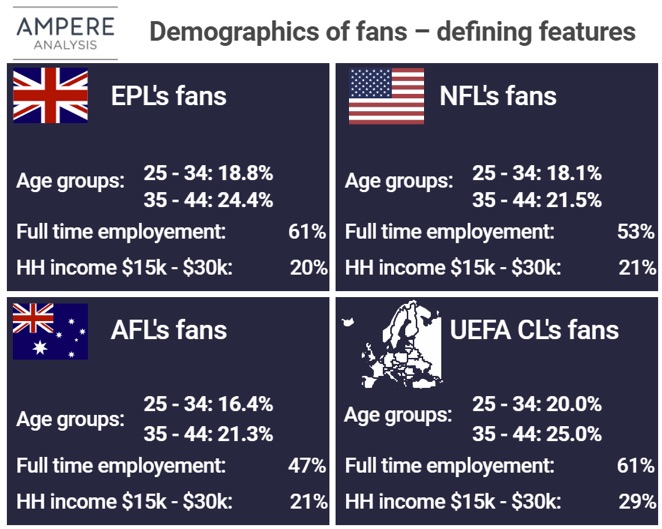 The research of 28,000 consumers across 14 markets found that football was by far the most popular pay-TV sport, with more than a quarter tuning in. That placed the beautiful game nine percentage points higher than the Olympics (ranked second at 19%) and twice as popular as third placed tennis (14%).

Yet Ampere was keen to find just how high the football price tag could go, given that the bill for the UEFA Champions League is already over €2 billion and the likes of Facebook, Google and Amazon are showing interest in purchasing rights. The Champions League is also the competition viewers are most willing to pay for. Almost a tenth said they would be willing to pay regularly to watch the tournament, compared with 7% for the FIFA World Cup. The Champions League is ranked in the top three competitions worth paying for in 11 out of 14 of the markets surveyed, more than any other. Only the US, Sweden and Australia don’t feature it in their top three.

The Champions League didn’t only score as the most popular choice as a tournament worth paying to watch, but was also attracted a highly desirable audience, its demographics comparing favourably with other major national competitions such as the US National Football League (NFL), the English Premier League (EPL) and the Australian Football League (AFL). These demographic profiles, said Ampere, are essential for broadcasters and channels when planning which leagues are worth the rights price tag.

Willingness to pay to watch the Champions League and the FIFA World Cup is far higher amongst younger consumers. In Europe, 21% of 25- 34-year-olds and 22% of 55-64-year-olds say they enjoy watching UEFA Champions League. However, Ampere notes that only 8% of 55-64 –year-olds would be willing to spend to access to the competition, compared to 11% of 25-34-year-olds (that’s over half of those who enjoy watching the competition). Overall, the Champions League was found to be more valuable to younger viewers, except in the UK where those aged over 35 are more likely to pay for sports in general.

Looking at global appeal of tournaments, the English Premier League enjoys the highest demand outside of its home market, and has the biggest absolute value among European competitions. It is especially popular in Denmark, Sweden, Poland and Saudi Arabia. Nearly 6% of all consumers surveyed said they would be willing to pay regularly to watch the EPL. In the UK specifically, the figure rises to 17.5%. However, the proportion of UK consumers willing to pay for access to EPL is lower than the proportion of German, Italian and Spanish consumers willing to pay for Bundesliga, Serie A or LaLiga.

Commenting on the research, Ampere analyst Alexios Dimitropoulos, said: “Even though operators are under pressure, the importance of sport and the intense competition for rights indicates that prices are unlikely to drop any time soon. Furthermore, the entry of the OTT players will herald new options for viewers, from fan-led social reporting to increased club-led coverage.”
Tweet