Telkomsel turns on Nickelodeon Play in Indonesia | Programming | News | Rapid TV News
By continuing to use this site you consent to the use of cookies on your device as described in our privacy policy unless you have disabled them. You can change your cookie settings at any time but parts of our site will not function correctly without them. [Close]

Leading Indonesian telco Telkomsel has confirmed the launch of the Emmy award-winning Nickelodeon Play app in the country. 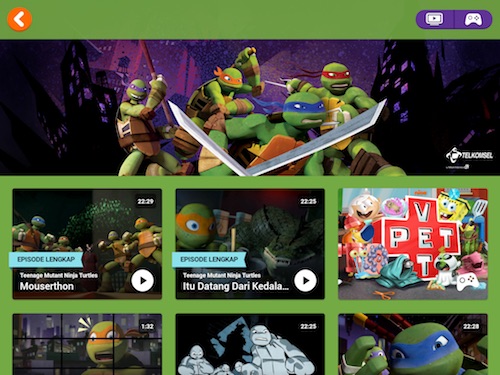 Nickelodeon Play was first launched in Singapore in 2016, and Indonesia is the second market in the Asia region to launch it.

Nickelodeon Play is part of Viacom Play Plex, a suite of mobile apps for each of Viacom’s major international brands, offering video-on-demand (VOD) access to a range of current and library content, and other short-form, game and music video content.

Created for kids aged seven and over, as well as their parents and caregivers, the content will include many full-length episodes, first and exclusive shows, short-form videos, games, and surprise elements from the network’s animated and live-action series. The Nickelodeon Play app features free access to selected episodes and on-demand access to Nickelodeon’s popular series such as SpongeBob SquarePants, Teenage Mutant Ninja Turtles, Avatar: The Legend of Aang, and ALVINNN!!! and The Chipmunks. It also includes free games from action, to puzzle, to strategy game categories such as Super Brawl World, Bikini Bottom Tic Tac Toe, and Block Party 3.

Nickelodeon Play is the first kids’ pack in the Telkomsel over-the-top (OTT) stable and is on offer to the telco’s base of over 190 million mobile subscribers. “Our customers appreciate entertainment on-the-go as well as the flexibility to watch what they want, when they want,” commented Telkomsel vice president, digital lifestyle, Crispin Peter Tristram. “Telkomsel’s partnership with Nickelodeon and the addition of Nickelodeon Play to our VideoMAX service, means that we can now better cater to our customers across ages, and give our subscribers greater choice and enjoyable entertainment with endless fun and surprise experiences, supported by our 4G network.”

“We’re delighted to introduce Nickelodeon Play to fans in Indonesia, especially when viewers and in particular kids in Indonesia, are accessing a wide range of devices to view content. The immersive and interactive app is a great new way to experience Nickelodeon’s unique brand of funny, while allowing kids to re-discover the content they already love,” commented Syahrizan Mansor, vice president, Nickelodeon Asia, Viacom International Media Networks.