Legacy services set for collapse as virtual MVPDs disrupt pay-TV market
By continuing to use this site you consent to the use of cookies on your device as described in our privacy policy unless you have disabled them. You can change your cookie settings at any time but parts of our site will not function correctly without them. [Close]

The bad news keeps piling up for legacy pay-TV service providers, with a new TDG Report calculating that they will lose as much as just over a quarter of their current number of subscribers by 2020. 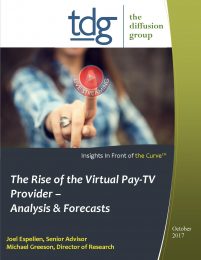 In The Rise of the Virtual Pay-TV Provider - Analysis & Forecasts, TDG assessed the future of pay-TV, the decline of legacy services and the rise of virtual providers. Somewhat distressingly it found that the future of residential pay-TV services will likely be ‘wrought’ due to what it believes will be an intensifying clash between virtual operators like Sling TV and DirecTV Now,  and traditional cable, satellite and telco pay-TV providers.

Worse for all players, TDG predicts that the battle will be for a larger slice of a declining market. TDG expects that the penetration of live multichannel pay-TV services will decline from 85% of US households in 2017 to 79% in 2030. While it concedes that this is statistically a loss of only 7%, the analyst insists that nonetheless the fall illustrates the ongoing secular decline of a once healthy market space. TDG predicts that, by 2030, roughly 30 million US households will live without an MVPD service of any kind, be it virtual or legacy.

During this time, it predicts that legacy MVPDs will experience considerable subscriber losses, due not only to long-term industry trends but also growing competition from virtual pay-TV providers. Consequently, legacy pay-TV penetration will fall from 81% of US households in 2017 to 60% in 2030, down 26%. By stark contrast, it believes that at the same time, virtual pay-TV penetration will grow from roughly 4% of US households to 14%, up 350% but from a very small base.

“TDG said early on that the future of TV was an app. Unfortunately, most incumbent MVPDs weren't taking note,” commented TDG senior analyst and report author Joel Espelien. “The question is no longer if the future of TV is an app, but how quickly and economically incumbents can adapt to this truth and transition to an all-broadband app-based live multichannel system.”