Mobile video demand to spur 5G deployment worldwide | Mobile | News | Rapid TV News
By continuing to use this site you consent to the use of cookies on your device as described in our privacy policy unless you have disabled them. You can change your cookie settings at any time but parts of our site will not function correctly without them. [Close]

Communications technology and services firm Ericsson forecasts there will be a billion 5G subscriptions for enhanced mobile broadband by 2023, with video services set to prosper from the next-gen infrastructure. 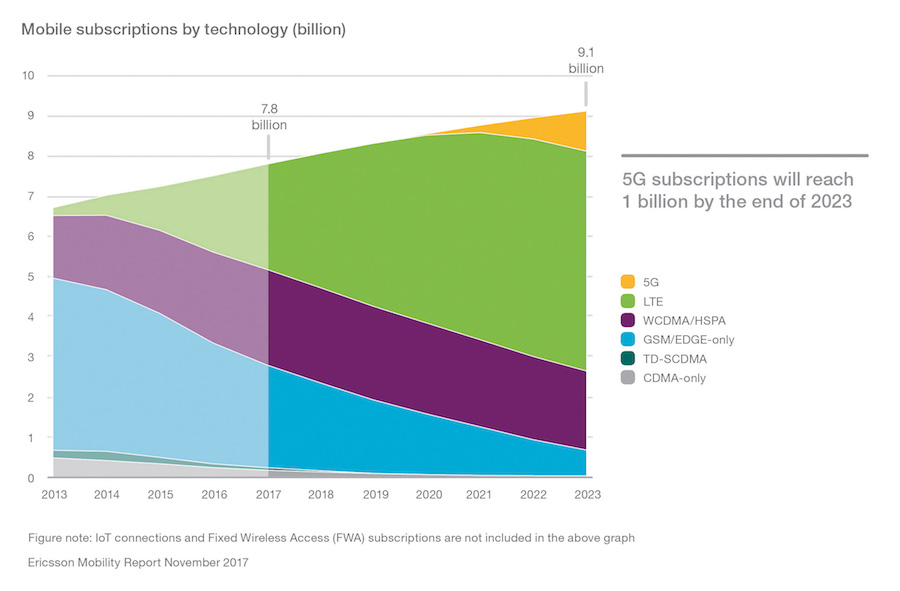 The main driver will be that mobile data traffic is expected to surge by eight times during the forecast period, reaching 110 Exabytes per month by 2023. This corresponds to 5.5 million years of high-definition (HD) video streaming.

In the November edition of the Ericsson Mobility Report, the vendor said it expects 5G to cover more than 20% of the world’s population by the end of 2023. The first commercial networks based on 5G New Radio (NR) are expected to go live in 2019, with major deployments from 2020. Early 5G deployments are foreseen in several markets, including the US, South Korea, Japan and China.

In tandem with the infrastructure buildout, all regions are expected to maintain mobile data traffic growth, with North America showing the highest average usage per smartphone, exceeding 7GB per month by the end of 2017. Video consumption continues to fuel this growth, with young millennials the driving force behind video’s uptrend. Those in the 15-24 age bracket, for instance, stream 2.5 times more than those over 45.

Streaming video in higher resolutions and an emerging trend of increased streaming of immersive video formats, such as 360° video, will also have an impact on data traffic consumption volumes, the report found. For example, a YouTube 360° video uses four to five times as much bandwidth as a normal YouTube video of the same perceived quality.