Clear majority view online video on in-home TVs | Online Video | News | Rapid TV News
By continuing to use this site you consent to the use of cookies on your device as described in our privacy policy unless you have disabled them. You can change your cookie settings at any time but parts of our site will not function correctly without them. [Close]

Received wisdom has always had it that online video was a key, if not the leading, alternative to set-based TV viewing, but research from S&P Global Market Intelligence has revealed that an overwhelming majority of Internet households watch via in-home TVs. 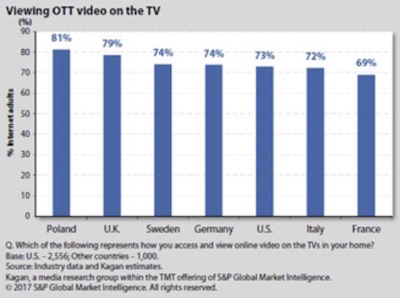 The survey showed that as many as 81% in Poland and 79% in the UK watch online video on a TV set, with France the lowest of the major countries with 69% adoption. Sweden, Germany, the US and Italy ranged from 74%-72%.

Yet even if there was a general majority of TV users, the survey also found that the devices consumers prefer to use to deliver online video content to the TV varies substantially in Europe and the US. In Europe, consumer preferences vary naturally across different states. Nearly three-fifths (56%) of consumers in Poland streamed online video from their PC to their TV set, while only 29% used a PC to TV connection in the UK. In addition, 37% of Internet households reported that they use direct Internet connectivity from their smart TV to watch online video, compared with only 18% in France. A much smaller percentage of consumers in Europe that used a gaming console, Blu-ray player or SMP to deliver online content to the TV. The use of service provider-specific set-top boxes (STBs) was prevalent in the UK (31%), but almost non-existent in Poland (6%).

By contrast, in the US, consumers tend to use a wide variety of Internet-connectible devices for watching online video on the TV. In 2017, US Internet households were equally likely to be using a smart TV, Blu-ray player, SMP or a pay-TV STB to watch online video on the TV. Over the past two years, the data shows substantial growth in the use of smart TVs, Blu-ray players and SMPs.

In its report, S&P Global Market stressed that an important difference between US Internet households and those in Europe is that the US averages between two and three TVs per household, whereas few households in Europe have more than one TV.
Tweet