Amazon announces AWS Elemental Media Services | Infrastructure | News | Rapid TV News
By continuing to use this site you consent to the use of cookies on your device as described in our privacy policy unless you have disabled them. You can change your cookie settings at any time but parts of our site will not function correctly without them. [Close]

As part of a major streamlining of the various business lines and verticals across the Amazon estate, AWS has launched AWS Elemental Media Services, a new integrated suite of solutions designed to build end-to-end workflows for both live and on-demand video. 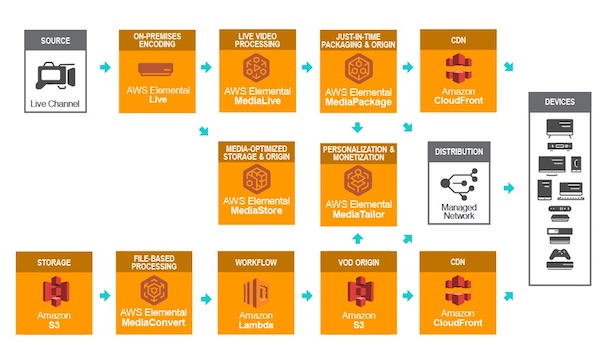 The new AWS Elemental Media Services is designed to let customers build with the professional features, image quality and reliability needed to deliver premium video experiences to viewers across a multitude of devices. Such services are said to allow broadcasters eliminate the need to procure expensive equipment for video data centres and automate what were previously complex, labour-intensive processes that manage ongoing video operations.

“For the better part of six decades, professional-grade video workflows were limited to a few major industry players who could afford to build and maintain customised infrastructure that would be updated only once or twice each decade,” explained Alex Dunlap, general manager at AWS Elemental. “These companies spent a great deal of time, money and focus operating infrastructure with resources that could have been better spent creating great content and viewer experiences. We built AWS Elemental Media Services to let customers focus on delivering top-quality video reliably to any device, everywhere, without the undifferentiated heavy lifting of managing infrastructure. This not only helps traditional video providers innovate faster, but it also opens up new opportunities for start-ups, government agencies, schools, and multinational enterprises that, before today, had limited access to premium-quality video technology.”

AWS fundamentally believes that the video industry is transforming, seeing an increasing speed of innovation paced by new market entrants with converging video application requirements driven by mobile and the internet. In essence that means assisting major broadband in making a transition from delivering services solely through a traditional pay-TV platforms to a now increasingly demanded and expected over-the-top (OTT)/online basis. The company quoted ABI Research data indicating that OTT currently makes up 15% of industry revenues, growing at almost 10x the pace of pay-TV. The data also predicted that within five years, the OTT segment could make up a third of the market.

One key AWS customer for whom it will be supplying AWS Elemental Media Services is BT who has the precise need to deliver video both to Internet-connected devices and traditional broadcast set-top boxes for its core BT TV IPTV offer and the growing BT Sport service. Commenting on what he sees the solution as offering, Ian Parr, director TV and broadband infrastructure for BT said: “Rationalising our on-premises converged headend and extending that infrastructure widely across the BT enterprise requires an all-in shift to the cloud. AWS Elemental has played a key role in our TV and Sport platform evolution over the past few years. The new AWS Elemental Media Services AWS Elemental Media Services are a natural extension of media workflows to the cloud. The ease of use of these AWS console-based services for end-to-end workflows will provide a level of flexibility and efficiency that will be a game changer for our industry while providing a flexible option that can coexist with legacy on-premises live and on-demand infrastructures deployments.”