Fans expect poor quality for sports live streaming | Media Analysis | Business | News | Rapid TV News
By continuing to use this site you consent to the use of cookies on your device as described in our privacy policy unless you have disabled them. You can change your cookie settings at any time but parts of our site will not function correctly without them. [Close]

Nearly three-quarters (72%) of consumers who watch sports via streaming have come to expect bad service during live games. 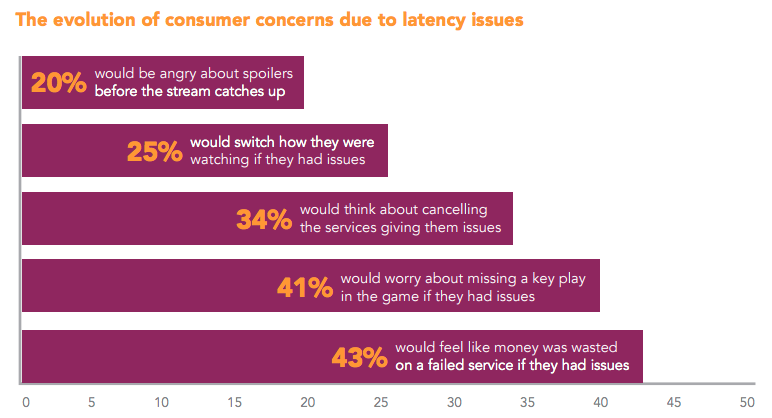 This is according to Phenix’ Streaming Wars: Sports Report, which found that 63% of sports watchers are reluctant to sign up or re-subscribe to sports live-streaming platforms in 2018, with more than one in three (34%) reporting they would think about cancelling a service that is giving them an issue.

Latency issues have the potential to genuinely impact streaming businesses’ bottom lines. The report uncovered that not only are sports watchers expecting streaming disruptions; they are frustrated by them, worried about spoilers, are switching services and wondering if they’ve wasted their money.

“It’s apparent the ‘live’ streaming industry is fundamentally broken and latency issues are becoming a big, loud problem,” said Jed Corenthal, CMO at Phenix. “Sports is always going to need to be watched in real-time, but outside traditional broadcast mediums, the industry is still unable to offer it at scale, as evident by recent issues during livestreams of major sporting events.”

He added: “The good news is, sports fans aren’t going to stand for this and have the potential to be the primary voices calling for the industry to rethink what it means to truly deliver a game in real-time. They’re considering cancelling their subscriptions or just not signing up for new ones at all next year. Hopefully, these findings will serve as a wake-up call that finally convinces streaming platforms to solve the latency issues plaguing the market.”

Respondents also said they would like to see more features: more than one in three (36%) want to gain insights into player stats and information; over one in three (36%) want to stream more than one game on different devices; 30% want the ability to watch in virtual reality (VR) to view the game from different angles; and a fifth (22%) want to see updates from the locker room/sidelines and have an insider view into press conferences.

Other ‘asks’ include the ability to talk to/interact with players and coaches in real time (21%); the ability to engage with other viewers (17%); access to excusive social media stories (16%); and the ability to participate in score/play predictions (15%).

“Luckily, with so many major sporting events coming up in early 2018 – the Olympics, the Super Bowl, the World Cup – there’s incredible opportunity for franchises, broadcasters and streaming platforms to finally get the live stream right,” said Corenthal. “Correcting course means implementing end-to-end technology that provides an optimal, true real-time streaming experience that works at scale. Otherwise, latency will continue to wreak havoc on the industry and impact revenue for platforms that rely on such a passionate user base.”