TV creates nearly three-quarters of advertising-generated profit | Ad Tech | News | Rapid TV News
By continuing to use this site you consent to the use of cookies on your device as described in our privacy policy unless you have disabled them. You can change your cookie settings at any time but parts of our site will not function correctly without them. [Close]

An independent study of over 2,000 ad campaigns quantifying advertising’s business impact has found that TV advertising out-performs all other media investments, in both the short and long term. 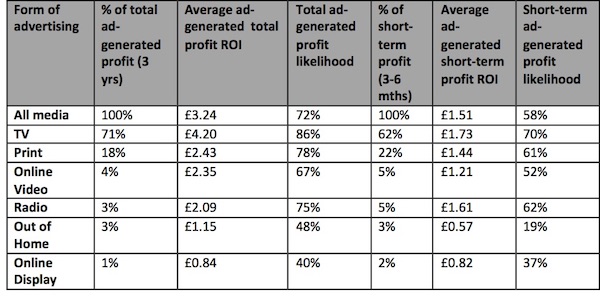 The Profit Ability: The Business Case For Advertising report was commissioned by Thinkbox, the organisation that represents commercial TV in the UK, and is said to offer proof that all forms of advertising create profit to varying degrees in both the short and long term. The study was carried out by Ebiquity and Gain Theory, who independently evaluate advertising performance and effectiveness for hundreds of brands, analysing over 2,000 advertising campaigns across 11 categories to uncover the impact that different forms of advertising have on short-term profit (within 3-6 months of a campaign finishing), and then combined these learnings with results for profit generated over the longer term (up to 3 years on) to determine total profit return.

The study revealed that TV advertising delivers the largest volume of both short-term and total advertising-generated profit and is the ‘safest’ (lowest risk) advertising investment a business can make, with the highest likelihood of profit return. The study found that TV delivers so much profit to advertisers because its scale and popularity enables it to continue being effective at high volumes of investment. It added that advertisers can increase investment in TV to a higher level than other media and it will continue to generate a profitable return.

Indeed, on average, all advertising was found to create a total profit return on investment (ROI) over 3 years of £3.24 per pound spent.; for TV, this figure was £4.20. TV generated 71% of the total ad-generated profit over three years and 86% of TV advertising campaigns delivered a profitable return. TV was also found to be the most effective short-term form of advertising, responsible for 62% of all advertising-generated profit in the short term at an ROI of £1.73 for every pound spent, also the highest of any media. Online video was responsible for 4% of an average ad-generated total profit, and average ROI of £2.35.

Commenting on the research, Matt Hill, Thinkbox’s Research and Planning Director said: “Businesses are under immense economic pressure and marketers have to justify everything they spend. It is crucial that we constantly refresh and update our understanding of what different forms of advertising contribute so that marketers are spending wisely. This study by two highly respected, independent organisations with robust data at their disposal bridges the gap between the marketing and finance departments with compelling evidence that quantifies advertising’s ability to deliver shareholder value, and TV’s centrality to that.”