SVOD attracts 1.6MN MENA subscribers in Q3 2017 | VOD | News | Rapid TV News
By continuing to use this site you consent to the use of cookies on your device as described in our privacy policy unless you have disabled them. You can change your cookie settings at any time but parts of our site will not function correctly without them. [Close]

The subscription video-on-demand (SVOD) market in the Middle East and North Africa (MENA) grew 19% from the second to third quarters of 2017, according to research from Dataxis. 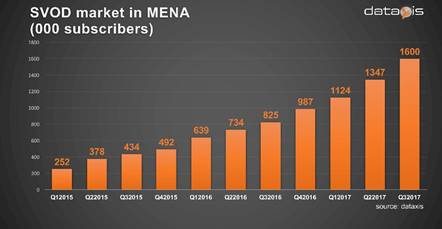 A total of 1.6 million people subscribed to an SVOD platform in the third quarter of 2017, say the researchers, who attributed rising awareness of the SVOD model following Netflix’s arrival on the regional scene, combined with an increase in the number of tie-ups between SVOD operators and telecommunications operators in the region.

SVOD services by players such as Starz Play Arabia, icflix and iflix are now offered via mobile and IPTV services in many countries across MENA, with customers billed direct by their telecommunications provider.

However, strong disparities persist within the countries in the zone, the growth being mainly driven by GCC countries Saudi Arabia with 32% of the overall market, the UAE with 22% and Kuwait with 7%. Qatar accounted for 6% of MENA’s SVOD, followed by Tunisia with 6% and Egypt with 4%, said Dataxis.

“Although the market is still at an early stage, Dataxis’ forecasts are positive provided that the necessary components for a sustainable growth, such as partnerships with telecom operators and investments in attractive content, are met in the years to come,” the researchers said.
Tweet