Streaming now preferred method for watching favourite shows | Media Analysis | Business | News | Rapid TV News
By continuing to use this site you consent to the use of cookies on your device as described in our privacy policy unless you have disabled them. You can change your cookie settings at any time but parts of our site will not function correctly without them. [Close]

How times change: viewers in the US are now more likely to say they watch a recently discovered favourite show from an online source, rather than through their pay-TV set-top box (STB). 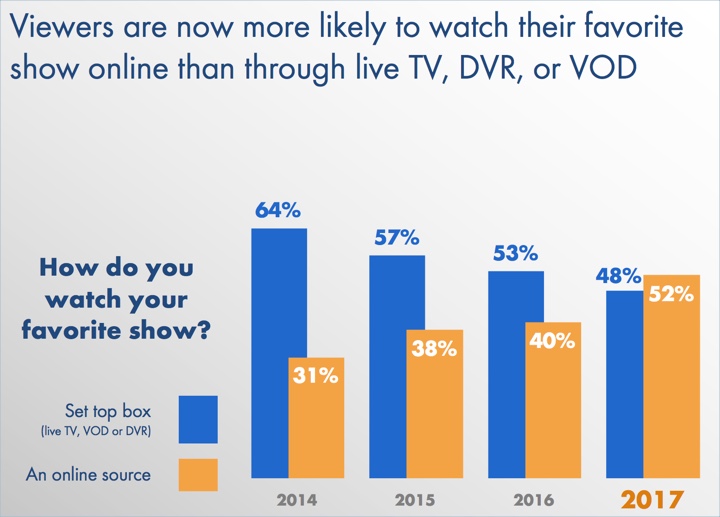 According to Hub Research’s annual Conquering Content, this is the first time that streaming has won in that regard since the firm began tracking US habits in 2014.

About half (52%) of viewers now say they watch their favourite show online, while 48% watch through the STB.

“These findings suggest that the aggressive investment SVODs are making in original and exclusive content is paying big dividends,” said Peter Fondulas, co-author of the study and principal at Hub. “In this research and other recent studies, we see clear evidence that high-profile online exclusives generate buzz that draws consumers to these platforms, which not only helps attract brand new subscribers, but also builds loyalty among current customers.”

“This finding is a great example of how SVODs have been able to transform themselves from technology companies that distribute content, into entertainment companies that create it,” added Jon Giegengack, co-author of the study. “The amount of content being created today is greater than the disposable time available to watch it. In the future, share of total TV time may turn out to be a more important way to evaluate platforms than looking at the number of subscribers.”