Coalition Against Piracy escalates efforts to curb on-going regional revenue leakage | Security | News | Rapid TV News
By continuing to use this site you consent to the use of cookies on your device as described in our privacy policy unless you have disabled them. You can change your cookie settings at any time but parts of our site will not function correctly without them. [Close]

The newly formed Coalition Against Piracy (CAP) has outlined the steps it is taking to rid the Asian pay-TV industry of increased piracy during an annual convention held by Asia’s multichannel video industry body CASBAA in Macau. 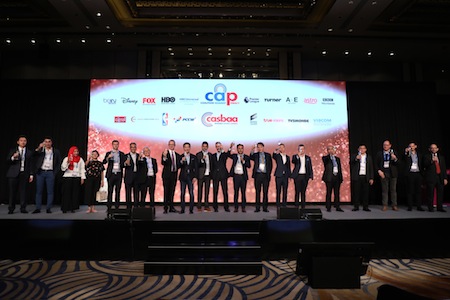 According to CASBAA, TV production quality is soaring across Asia. Audiences are engaging with its members’ products as never before. New ways of video distribution such as over-the-top (OTT) broadband services are reaching millions of additional customers across a CASBAA footprint that reaches from India and Pakistan to Japan and Korea, from China and Mongolia to Australia and New Zealand.

The Macau gathering (pictured) marks the initiation of joint work in southeast Asia against illicit streaming devices (ISDs) and the app networks that underpin them.

Illegally-made devices have become a drain on both traditional pay-TV and over-the-top (OTT) video markets in Asia, with a recent survey finding 14% of consumers in Singapore admitting they regularly use an ISD.

“The driving force behind establishment of CAP is the need for united, collective action by all branches of the video industry”, said John Medeiros, chief policy officer, CASBAA. “Sports, films, TV series, international as well as local content – everyone trying to deliver quality content to the public is threatened by the inundation of ISD boxes and apps from commercial piracy syndicates. CAP aims to bring all these stakeholders together, and work in parallel with other similar coalitions around the world.”

Neil Gane, general manager, Coalition Against Piracy, added: “Two immediate priorities will be the disruption of the ISD ecosystem at its source and enhanced intermediary engagement with both eCommerce platforms and financial processors to disrupt transactions at the point of sale.”

The meeting heard from UK-based speakers outlining how they had faced off successfully similar challenges. Kevin Plumb of the English Premier League (EPL) noted that over the past 18 months the illegal broadcasting of live Premier League matches in pubs in the UK had, in his words, “been decimated”, while pay-TV operator and EPL right owner Sky remarked just how site-blocking technology had, no pun intended, moved the goalposts significantly. Sky UK’s Matthew Hibbert asserted: “In the UK you cannot watch pirated live Premier League content anymore.”