Euronews wins exclusive on-board news source rights with Eurostar | Mobile | News | Rapid TV News
By continuing to use this site you consent to the use of cookies on your device as described in our privacy policy unless you have disabled them. You can change your cookie settings at any time but parts of our site will not function correctly without them. [Close]

As the train operator’s network spreads across western Europe, Euronews has been selected by Eurostar as the only news service on the rail operator's web portal for passengers travelling on its new fleet of trains. 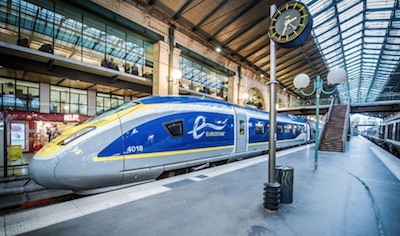 The deal means that Eurostar passengers departing from London, Paris and Brussels can enjoy complimentary on-board Wi-Fi access to articles by Euronews journalists on global and European current affairs, business and culture, in English and French. The partnership also offers Eurostar travellers access to Euronews throughout their journey. After its debut in the Business Premier lounge at Bruxelles-Midi station in 2015, Euronews has been available at the Paris-Gare du Nord station since September 2017, where the Euronews Display service shows headline stories from Europe and around the world.

“We are proud to be strengthening our partnership with Eurostar, which is one of the quickest and simplest ways of travelling in Europe between the United Kingdom, France and Belgium. We will be accompanying passengers throughout their journey - in station lounges and on trains via on-board Wi-Fi,” said Jenny Delcambre, head of out-of-home distribution at Euronews.

“This deal with Eurostar fits our strategy of adapting Euronews content syndication to news consumption habits, in order to meet the needs of those individuals who stay connected on the move, should they travel for business or leisure. The partnership with Eurostar gives our outlet unrivalled visibility among an audience of travellers, who can also enjoy Euronews in international airports and hotels all over the world.”