Losses due to online TV, film piracy soar to $52BN | Security | News | Rapid TV News
By continuing to use this site you consent to the use of cookies on your device as described in our privacy policy unless you have disabled them. You can change your cookie settings at any time but parts of our site will not function correctly without them. [Close]

Losses due to online TV, film piracy soar to $52BN

A study from Digital TV Research has revealed that online TV piracy is spreading worldwide, with revenues lost to the phenomenon in 138 countries set to nearly double between 2016 and 2022 to $51.6 billion. 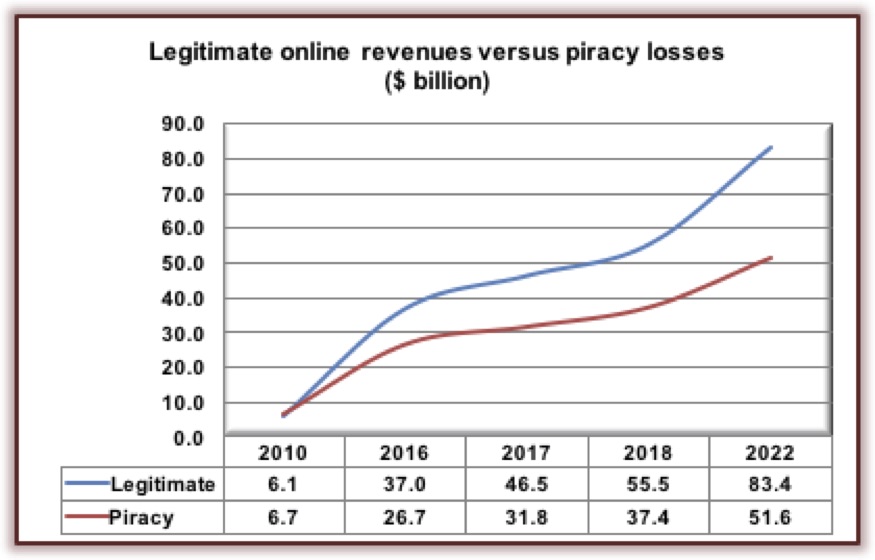 Making the findings more alarming is the fact that these figures relate purely to TV episodes and films and do not include sport, which is hugely pirated, especially in areas such as the Middle East and Asia Pacific.

Overall, the top five countries represented 63% of the 2016 total, but this proportion is set to fall to 55% by 2022. Eight countries will record revenue losses of more than $1 billion in 2022, double the 2016 count. The report suggests that Asia Pacific will become the largest region for online piracy in 2018 – overtaking North America. Asia Pacific’s piracy losses are projected to double between 2016 and 2022 to nearly $20 billion.

Even though he admitted that piracy will never be eradicated, Simon Murray, principal analyst at Digital TV Research and author of the Online TV Piracy Forecasts report said that the analysis was not all bad news. “Piracy growth rates will decelerate as more effective government action is taken and as the benefits of legal choices become more apparent,” he said. “Legitimate revenues from OTT TV episodes and movie overtook online piracy losses as far back as 2013. The gap between the two measures is widening.”