Fibre to the fore across Asia Pacific as China leads FTTx surge | IPTV | News | Rapid TV News
By continuing to use this site you consent to the use of cookies on your device as described in our privacy policy unless you have disabled them. You can change your cookie settings at any time but parts of our site will not function correctly without them. [Close]

FTTx has been propelled to the status of strongest growing fixed broadband access technology in Asia Pacific following significant roll-out of fibre in China, according to a report from Dataxis. 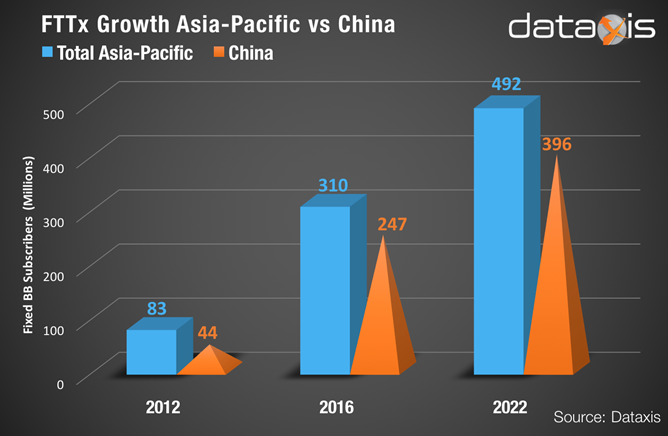 The FTTx market will grow at a CAGR of 35% in the Asia Pacific between 2012 and 2022, said researchers. China accounts for almost four-fifths of the FTTx connections out of total fixed broadband numbers in 2016, which bodes well for the local IPTV market.

Telecommunications operators China Unicom, China Mobile and China Telecom are largely responsible for the FTTx build in China, together providing FTTx connections to almost 80% of fixed Internet subscribers in China. China Telecom is the market leader with 117 million FTTx subscribers in June 2017.

Next-generation broadband plans are also being rolled out in countries such as Singapore and Australia, which has lead to the launch of new fibre-only operators.

“In Australia, Vodafone is taking advantage of the National Broadband Network (nbn) to implement its own fibre network. Another group, MyRepublic is sizing the demand for high speed Internet by proposing 100% optic fibre plans in New Zealand, Singapore, Indonesia and Australia,” said Dataxis’ Juliette Boulay.

“With all the FTTx growth, DSL is the most affected, showing negative growth of 18% CAGR between 2012-2022. The second most growing broadband access technology after FTTx will be cable which stands at 19% during 2012-2022. Dataxis forecasts that standard cable will start to decline from 2018 and China will be a significant contributor to high-speed cable technology (Docsis 3.0) growth too,” she added.
Tweet