Telefónica leads fibre growth in Spain | IPTV | News | Rapid TV News
By continuing to use this site you consent to the use of cookies on your device as described in our privacy policy unless you have disabled them. You can change your cookie settings at any time but parts of our site will not function correctly without them. [Close] 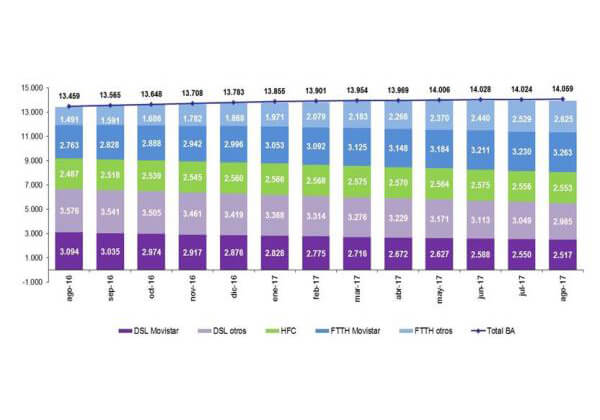 By the end of August 2017, there were over 5.8 million fibre accesses in Spain, through which broadband, VoIP, IPTV and advanced TV services were delivered. Movistar, with 55.4% of subscribers and the largest fibre footprint in the country, leads the market with 3.26 million subscribers, having added half a million accesses over the past year.

Together with Movistar, Orange and Vodafone own 93.3% of accesses.

However, in recent months, Mas Movil has entered the market with an aggressive offer (which currently doesn’t include IPTV) and has gained 24,000 subs during August alone. In fact, when adding mobile services to the whole, Más Móvil nears a 10% market share.

Though official figures for the pay-TV sector aren’t as up-to-date as those for FTTH, fibre has been cited as one of the main drivers of premium TV services in Spain. In fact, since fibre-based, convergent services started to be offered in Spain, pay-TV has added over two million subs.
Tweet