MIPCOM 2017: Cosmos-Maya highlights kids’ animation Tik Tak Tail | Deals | News | Rapid TV News
By continuing to use this site you consent to the use of cookies on your device as described in our privacy policy unless you have disabled them. You can change your cookie settings at any time but parts of our site will not function correctly without them. [Close] 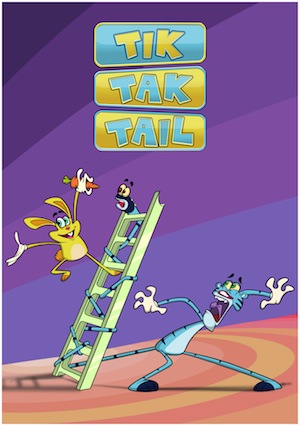 The animated comedy centres on the unending chase of Tik, a cute rabbit, by Tak, a ferocious tiger. But the Tail, who constantly eyes Tik’s carrots, always thwarts Tak’s plans. Tak and Tail are partners in crime with Tik always their target. But Tik outruns and outwits them by pitting them against each other.

“Tik Tak Tail is universal in its appeal and has its heart in the right pace. This new show on POGO makes for a fascinating game of one-upmanship, giving the chase-comedy a unique identity of its own,” said Krishna Desai, executive director and network head - kids, South Asia, Turner India.

The comedy also follows other hit animations from the Mumbai creative animation studio, including Motu Patlu and VIR – The Robot Boy, which has proved successful on Cosmos-Maya’s YouTube channel WowKidz.

Cosmos-Maya’s first European co-production Atchoo along with Studio Campedelli, Italy made its debut in India on Amazon Prime Video before its launch in Europe. The series is co-produced with Rai TV Italy.

“With a series of accomplishments on a global level already, we at Cosmos-Maya are aiming for a global success with Tik Tak Tail,” said Cosmos-Maya CEO Anish Mehta.