RTVE accused of manipulation, censorship in Catalan election coverage | Major Businesses | Business | News | Rapid TV News
By continuing to use this site you consent to the use of cookies on your device as described in our privacy policy unless you have disabled them. You can change your cookie settings at any time but parts of our site will not function correctly without them. [Close]

Journalists belonging to RTVE have reported biased coverage of the Catalan referendum causing the news board of the Spanish public broadcaster to initiate an internal investigation. 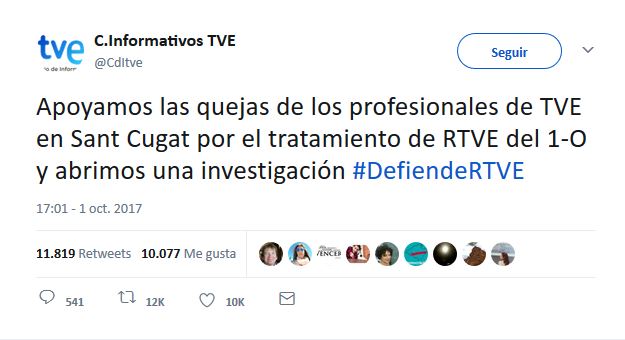 This is not the first time RTVE has been accused by both viewers and journalists of manipulating coverage during an event of crucial national importance. Since 2015, journalists have been reporting various instance they claim aim to increase the political control of the channel.

In this latest instance, several workers belonging to the corporation’s Catalan unit, based in Sant Cugat, near Barcelona, have criticised the role of RTVE in providing information about the referendum over the weekend.

Following the complaints, the broadcaster’s news board, the Consejo de Informativos de TVE, has announced an internal investigation will take place to see whether Madrid’s Government tried to apply pressure on journalists and censor specific news items, especially those regarding the police intervention in the riots surrounding the voting.

In addition, RTVE didn't cover the referendum on its main channel, La 1, though it did air special programming on Canal 24 Horas, the public network which has less of an audience, averaging a 2.9% share on 1 October. This decision has also prompted complaints from within the public corporation.

“Ashamed to belong to a public television that is not informing the people of atrocities we are today witnessing in Catalonia,” tweeted RTVE producer Carlos Vidal Teixidó.