OTT TV and film revs rocketing to reach $83BN over next five years | OTT | News | Rapid TV News
By continuing to use this site you consent to the use of cookies on your device as described in our privacy policy unless you have disabled them. You can change your cookie settings at any time but parts of our site will not function correctly without them. [Close] 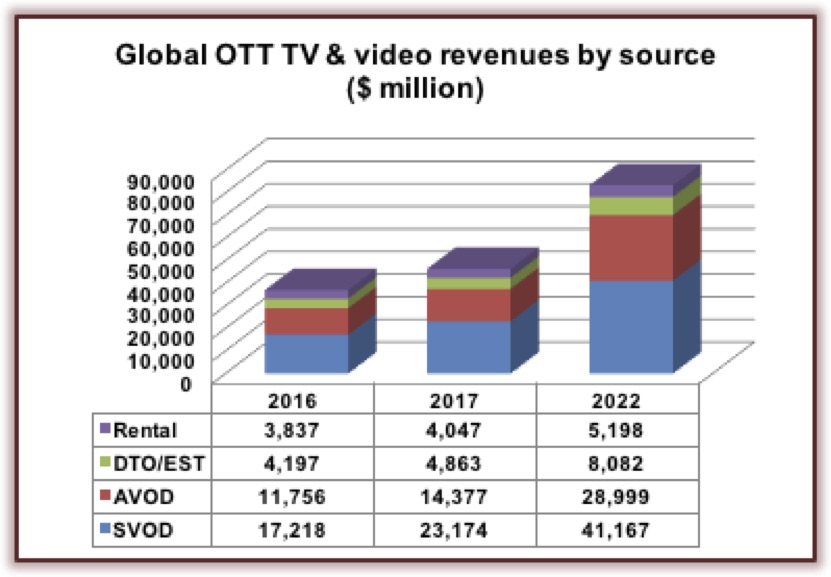 A study from Digital TV Research is forecasting that online TV episode and movie revenues for the leading 138 countries will reach $83 billion in 2022, more than double the $37 billion recorded in 2016.

The new Global OTT TV & Video Forecasts report also calculates that over-the-top (OTT) revenues will exceed $1 billion in 14 countries by 2022; double the count at end-2017. The top five nations will command two-thirds of global revenues. As well as predicting an overall bonanza, estimates that $9 billion will be added in 2017 alone.

Looking regionally, the report suggests that the US will remain as the dominant territory for online TV and video revenues by some distance. However, the US share of the global market will fall from 51% in 2016 to 40% in 2022. Contributing half the Asia Pacific total, China will add a further $7.6 billion, with its total revenues reaching $12 billion in 2022.