Amazon unveils new Indian comedy line-up | VOD | News | Rapid TV News
By continuing to use this site you consent to the use of cookies on your device as described in our privacy policy unless you have disabled them. You can change your cookie settings at any time but parts of our site will not function correctly without them. [Close]

Amazon Prime Video is to debut six comedy series from Indian producers Only Much Louder (OML) between now and February 2018. 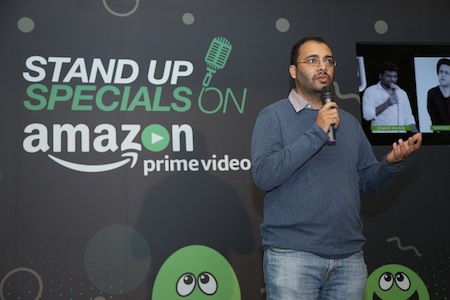 “Customers have told us how much they enjoyed Stand-Up Comedy Specials on Prime Video and we have been the leaders in defining this space for local stand-up comedy. So, we’re now set to launch a brand new comedy offering, created by some of the same comedians. In collaboration with OML, we’re excited to introduce six new comedy shows available exclusively and on-demand on Amazon Prime Video,” said Vijay Subramaniam, director, content, Amazon Prime Video India.

Ajay Nair (pictured), COO, Only Much Louder, said: “We are excited to work with some of the best comedy creators in the country to produce these shows. This is the first time they are creating multi-episode long form series and Amazon Prime Video is a great home for these shows given the significant commitment they have made in the last few months to make it the destination for comedy in India.”