Apple TV launches support for 4K | 4K/UltraHD | News | Rapid TV News
By continuing to use this site you consent to the use of cookies on your device as described in our privacy policy unless you have disabled them. You can change your cookie settings at any time but parts of our site will not function correctly without them. [Close]

Just as the eyes of the world were focused on the eagerly-awaited new range of iPhones, Apple has enhanced its online TV and video device to support 4K and High Dynamic Range (HDR). 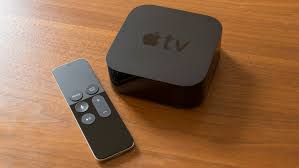 The new Apple TV 4K is designed to deliver what the CE giant calls a ‘stunning’ cinematic experience with crisper images, richer, more true-to-life colours and far greater detail in both dark and bright scenes than its previous version. The new device is built around the same chip that powers iPad Pro and supports both Dolby Vision and HDR10 so that users can enjoy TV shows and films on any HDR TV. It also has a built-in high performance 4K video scaler.

So that they can begin watching their content, iTunes users will get automatic upgrades of HD titles in their existing iTunes library to 4K HDR versions when they become available. Apple TV 4K will also soon offer 4K HDR content from popular video services, including Netflix and Amazon Prime Video.

Commenting on the launch, Eddy Cue, Apple’s senior vice president of internet software and services, said: “Bring the magic of the cinema straight to your living room with the new Apple TV 4K. Customers will love watching stunning 4K HDR movies from an impressive catalogue on iTunes, while also getting automatic upgrades of 4K HDR movies already in their iTunes library and enjoying 4K content on services like Netflix and Amazon Prime Video, coming soon.”

Apple TV 4K  starts at £179 for a 32GB version or £199 for 64GB. Customers will be able to order both Apple TV 4K models from 15 September with availability beginning a week later.
Tweet