Roku’s $100MN IPO may flounder | Media Investment | Business | News | Rapid TV News
By continuing to use this site you consent to the use of cookies on your device as described in our privacy policy unless you have disabled them. You can change your cookie settings at any time but parts of our site will not function correctly without them. [Close]

Online video equipment and service provider Roku announced last week that it’s filing for an initial public offering — but some analysts aren’t sure if the company can raise the $100 million it’s looking for. 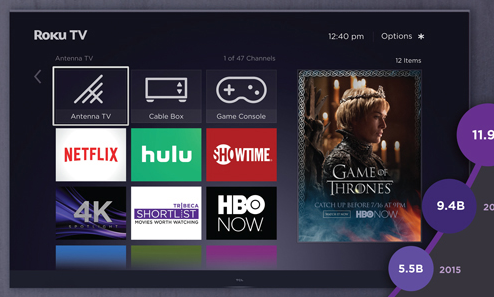 Roku, which was founded in 2002 after spinning off from Netflix, has raised more than $200 million in funding so far. And, it is ostensibly winning the streaming device game; it boasts 15.1 million accounts and streams a whopping 3.5 billion hours of content quarterly. It was the first mainstream device for watching Netflix in the big screen when its first device launched in 2008, and continues to increase its share of the streaming media player landscape.

According to Parks Associates, Roku accounts for about 37% of streaming media devices owned by US broadband households as of Q1 2017.

Parks also said that Roku’s share is up seven percentage points on the same quarter a year ago. Of the other major players in this market, only Amazon's Fire TV had an increase in its share of installed base during the same timeframe (going from 16% to 24% of US broadband households).

“Roku emerged early as a US market leader for streaming media players, and the company has held firmly to that position,” said Parks senior analyst Glenn Hower. “Higher-priced devices, such as the Apple TV, have not been able to keep up with low-priced and readily available Roku devices, which can be found at Walmart for as low as $29.99. A third of US broadband households own a streaming media player. The growth of the US OTT market provided consumers with unprecedented ease of access to video content. These streaming media devices make for quick and easy access to the top OTT libraries.”

But competition is encroaching — which should make investors nervous. Roku laid it out in its S1 filing: “Companies such as Amazon.com, Apple Inc and Google Inc offer TV streaming products that compete with our streaming players. Amazon.com has also recently launched a co-branded TV that natively runs its TV streaming platform that competes with Roku TV. In addition, Google licenses its operating system software for integration into smart TVs and service provider set top boxes. These companies have the financial resources to subsidize the cost of their streaming devices in order to promote their other products and services making it harder for us to acquire new users and increase hours streamed. These companies could also implement standards or technology that are not compatible with our products or that provide a better streaming experience on competitive products. These companies also promote their brands through traditional forms of advertising, such as TV commercials, as well as Internet advertising or website product placement, and have greater resources than us to devote to such efforts.”

It bottom-lined it: “If users of TV streaming content prefer these alternative products to Roku streaming players and Roku TVs, we may not able to achieve our expected growth in player revenue or gross profit.”

“After the barrage of cheap, perhaps subsidised devices such as the Chromecast ($35) and Firestick ($35), Roku was forced to develop the cheaper Roku Stick ($39) and the Roku Express ($29),” he said in a column, adding that aside from other streaming devices, Roku faces competition from smart TVs, gaming consoles, BluRay players and even Comcast, which has integrated Netflix streaming.

Also, Roku makes most of its money from platform sales — licensing, advertising and revenue shares from content providers. However, it its S1 filing it also said that Netflix accounted for about a third of the total watch time on its platform, making it the largest provider of content for Roku. However, “revenue generated from Netflix was not material to our overall revenue during the six months ended June 30, 2017, and we do not expect revenue from Netflix to be material to our operating results for the foreseeable future,” it said.

And later, it noted that: “Further, we receive no revenue from YouTube, the most viewed ad-supported channel by hours streamed on our platform for fiscal 2016 and the six months ended June 30, 2017.”

Maks FS put it succinctly: “You know what I call that? A HUGE FREAKING PROBLEM! Your top content provider accounted for no material revenue and is not expected to in the near future?”

There’s also the issue of operating profit. “For all of their competitive threats and issues, Roku is profitable and operating on fairly healthy gross profit margins,” he said. “The biggest problem, however, in all of their operating history, Roku has yet to turn an operating profit, burdened by corporate expenses and ongoing research and development.”

It of course remains to be seen how Roku’s stock does. It could follow in the footsteps of GoPro and Fitbit — both of which saw initial enthusiasm from the market before crashing and never recovering.

Nonetheless, early investor interest is there: Menlo Ventures will likely be the largest shareholder with a 35.3% stake, followed by Fidelity with 12.9%, 21st Century Fox at 7% and Globespan Capital Partners at 6.1%. The company will be listed on the NASDAQ under the ticker of ROKU.