Amazon nabs streaming rights for Ninnu Kori | VOD | News | Rapid TV News
By continuing to use this site you consent to the use of cookies on your device as described in our privacy policy unless you have disabled them. You can change your cookie settings at any time but parts of our site will not function correctly without them. [Close]

Telugu box office success Ninnu Kori is to be streamed on Amazon Prime Video in what is the latest acquisition by the video-on-demand platform for its growing Indian regional content library. 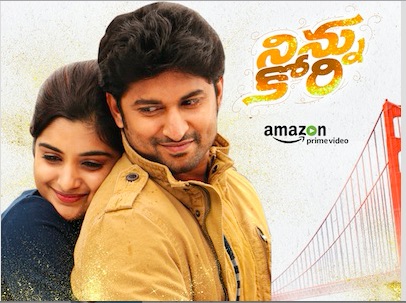 “The film received an overwhelming response from fans and viewers who have had the chance to watch it in theatres. The audience seems to have struck a chord with the emotional storyline and the brilliant performance by the actors. I am happy that the digital premiere of Ninnu Kori on Amazon Prime Video will give fans a chance to catch the film just weeks after theatrical release to relive the story at their own convenience and on their personal screens,” said the film’s director Shiva Nirvana.

Vijay Subramaniam, director - head of content, Amazon Prime Video India, said: “Ninnu Kori is another example of great cinema that audiences want to see. DVV Entertainments strives to produce movies, which deliver great entertainment value, and they have proved it through this very successful film. We hope that fans will love seeing this romantic entertainer on Prime Video at their convenience - whenever and wherever they want”.
Tweet