Review: Mexico’s telecom reform good for TV | Broadcast | News | Rapid TV News
By continuing to use this site you consent to the use of cookies on your device as described in our privacy policy unless you have disabled them. You can change your cookie settings at any time but parts of our site will not function correctly without them. [Close]

Mexico’s 2013 telecom reform has created an environment for broadcast to grow faster than it ever has, according to a new OECD Review. 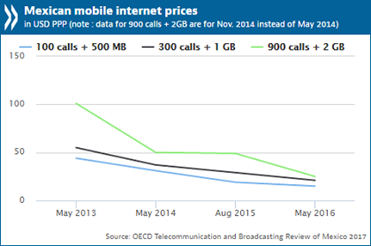 The OECD Telecommunication and Broadcasting Review of Mexico 2017 credits the legal and regulatory reform with the fact that the telecom and broadcasting sectors have grown faster than the broader economy since the overhaul.

The report also says that the changes helped create an environment for price reductions of up to 75% in mobile broadband packages, better quality services and the addition of 50 million mobile broadband subscriptions – more than the population of Colombia.

“Before this reform many Mexicans struggled to pay for long-distance calls to relatives and could not afford mobile internet services that other countries took for granted,” said Gabriela Ramos, the OECD chief of staff and G20 Sherpa. “Three-quarters of households had no Internet access. Today, communication services are much more affordable and millions more people are online. This is a great illustration of how better policy can improve people’s lives. I am confident Mexico will show determination in following through with implementing and building on the changes so far, to catch up with leading economies and build a solid basis for a digital future.”

Progress in broadcasting could be better, however. The report found that limited competition and restrictions on foreign investment are factors behind a 5% rise in pay-TV prices over 2013-16. While the permitted threshold for foreign ownership in broadcasters has been raised from 0% to 49%, eliminating the restriction altogether would promote competition and better services, as would taking advantage of convergence over digital networks to promote further competition, the Review noted.

It also encourages more competition in pay TV, including through the elimination of the existing legal fast track for mergers and acquisitions between non-dominant players.