Mexico leads LATAM pay-TV industry | Media Analysis | Business | News | Rapid TV News
By continuing to use this site you consent to the use of cookies on your device as described in our privacy policy unless you have disabled them. You can change your cookie settings at any time but parts of our site will not function correctly without them. [Close]

In times of cord-cutting and uncertainty for the traditional pay-TV industry, the Mexican market is continuing to grow and is driving Latin America subscriber numbers to nearly 70 million. 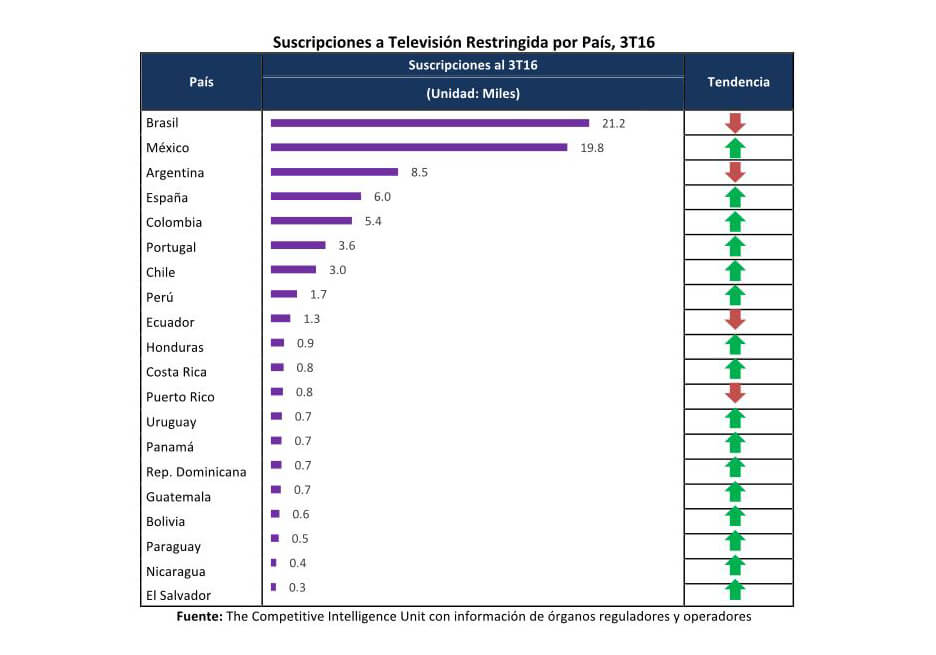 According to an analysis from the Organización de Telecomunicaciones de Iberoamérica (OTI), based on Q3 2016 figures, the region’s pay-TV industry grew by 4.2% year-on-year to reach over 68 million subscribers.

The report shows that Brazil is still LATAM’s largest market, with 21.2 million pay-TV households, although the figures issued by the country’s telecom authority, Anatel, have repeatedly shown that the Brazilian market is under the 19 million subscriber barrier.

According to the OTI, Mexico registered 19.8 million subs by Q3 2016, 12.1% more than a year before, becoming the region’s second market in terms of growth rate.

“The service’s penetration stands at 63.2%, well above the Latin American average (39.6%). In addition, the market hasn’t shown signs of slowing down over the last years, growing at a y-o-y rate of 11.8%,” said the report.

The competition of over-the-top (OTT) and video-on-demand (VOD) services is also growing in Mexico (latest figures show 7.4 million VOD subscribers), but the OTI believes that as yet this is having no direct effect on the pay-TV industry.