Medialaan taps Yospace to monetise live channels | Social TV | News | Rapid TV News
By continuing to use this site you consent to the use of cookies on your device as described in our privacy policy unless you have disabled them. You can change your cookie settings at any time but parts of our site will not function correctly without them. [Close] 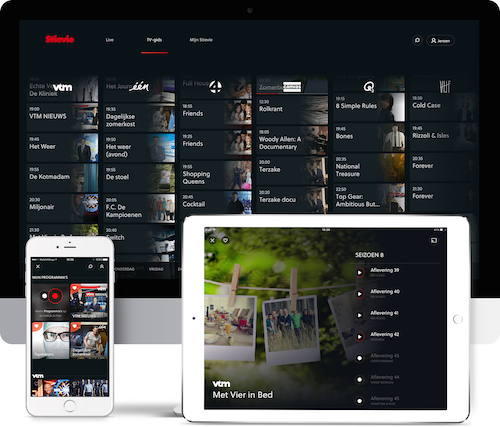 Available since 21 August 2017 on iOS, Android and online platforms, the new Stievie Premium edition offers 18 live TV channels and catch-up services for up to six days. It can be viewed on all screens — such as smartphone, tablet, laptop and TV screen — and it is also possible to schedule recordings. The offer includes the Medialaan channels VTM, Q2, Vitaya, CAZ, VTMKZOOM, KADET and Qmusic; VRT channels Eén, Canvas and Ketnet; SBS channels VIER, VIJF and ZES; complemented by Discovery channels Eurosport, TLC and Discovery and the channels provided by FOX: National Geographic and Nat Geo Wild. All these stations together account for almost 90% of the audience watching television in Flanders.

In what is said to be world-first thanks to the deployment, viewers are able to use scrub controls to rewind a live stream in a programme. Ad breaks for viewers using this capability are made shorter so they are able to catch up with the real-time live programming. “We want to make a difference as a media company and extend our strengths in linear broadcasting to the always-connected online world through radical innovation,” said Medialaan solution architect Pieter Coucke. “In essence we wanted to improve the user experience. By replacing ads that are shown on TV with personalised ads, customers watching the same live stream online have a much more compelling service.”

The Yospace platform is designed to allow advertising to be served in live channels online in a way that the company claims is so seamless that it is true to the user experience of broadcast television, while allowing new ads to be curated to the interests of each viewer. “The project with Medialaan has taken [Yospace] technology to a completely new level of sophistication that has not been seen anywhere before,” commented commercial director Edward New. “The forward-thinking attitude of Medialaan has helped engineer a step change in live television.”
Tweet