US binge viewing pervasive even though age plays a key role in frequency | Online Video | News | Rapid TV News
By continuing to use this site you consent to the use of cookies on your device as described in our privacy policy unless you have disabled them. You can change your cookie settings at any time but parts of our site will not function correctly without them. [Close] 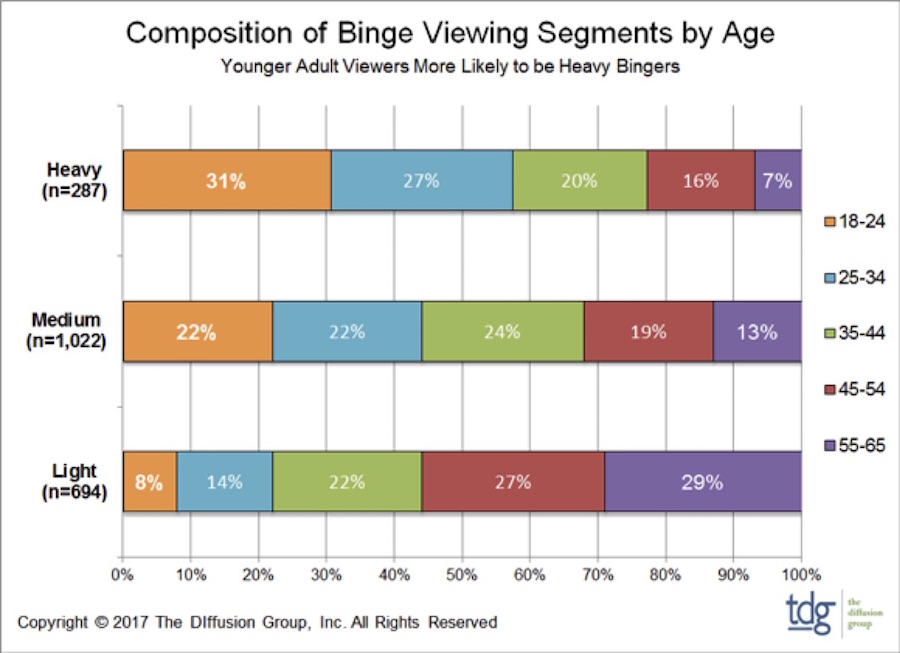 Research from The Diffusion Group has found that binge viewing in the US is rapidly becoming universal, with nearly nine in ten adult broadband users in the country bingeing at least occasionally.

TDG's analysis identifies and profiles three groups of adult broadband users (ABUS) in terms of their binge-viewing habits: heavy bingers who binge daily and comprise 14% of ABUs; medium bingers who binge on video monthly but not daily, comprising 51% of ABUs; and light/non-bingers who make up 21% of ABUs that binge less than once a month; and 14% who do not binge at all.

The new TDG report more or less concurs with a similar recent study from UK broadcast regulator Ofcom that the appetite to binge on boxsets is growing and that fundamentally the frequency of binge viewing skews strongly in favour of younger adults. Indeed, TDG analysts found that the frequency of bingeing is strongly correlated with the viewer's age. For example, 58% of heavy bingers are between the ages of 18 and 34, while 56% of light/non-bingers are age 45 and older.

As these consumers age and younger generations steeped in what the analyst calls quantum habits follow behind them, TDG president and principal analyst Michael Greeson argues in Binge Viewing - A Consumer Snapshot that this behaviour will only become more prominent, further impacting programming and distribution strategies.

“The fact that 31% of heavy bingers are between the ages of 18 and 34 further illustrates just how different millennial viewing habits are from those of older generations,” he observed “For more than a decade, TDG has predicted and observed a structural transformation in what it means to 'watch TV,' with viewing behaviour slowly changing from an activity defined by flipping between different live shows on different networks, to one characterised by on-demand binging of individual series.”
Tweet