Burgeoning bingeing drives down family viewing in UK | Media Analysis | Business | News | Rapid TV News
By continuing to use this site you consent to the use of cookies on your device as described in our privacy policy unless you have disabled them. You can change your cookie settings at any time but parts of our site will not function correctly without them. [Close] 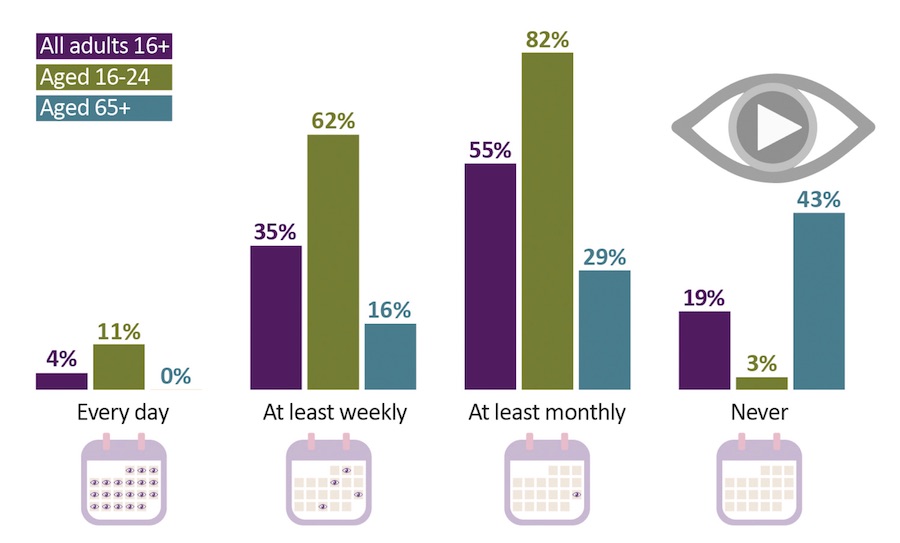 The concept of family viewing seems very much on the wane in the UK with research from Ofcom showing how an appetite to binge on boxsets is making TV more of a singular activity.

Fundamentally, the UK as now become a nation of binge viewers with four-fifths of adults, around 40 million people, using catch-up technology such as BBC iPlayer, or subscription services such as Netflix and Amazon Prime, to watch multiple episodes of a series in one sitting. The key drivers, said Ofcom, were the availability of faster home internet speeds, a rise in the number of connected TVs, and increased take-up of smartphones and tablets. However, the research found that the BBC iPlayer is the most popular on-demand service with 63% of adults saying they use it, followed by ITV Hub at 40% and then YouTube at 38% and Netflix at 31%.

Just over a third (35%) of people binge every week, and more than half (55%) do it monthly. Almost three-quarters of binge viewers say they sometimes watch more than they intend to, while 18% say this always happens. Yet more than a third (35%) of all binge viewers are trying to cut down their viewing in some way. This includes rationing their viewing (19%), finding an alternative hobby (10%), or even cancelling a TV subscription (4%).

More than half (53%) of those aged 12-15 enjoy weekly bingeing compared with just 16% of over-65s. For that older age group, more than half (59%) prefer a traditional release of one episode per week. The public service broadcasters’ on-demand services, such as All 4 and ITV Hub, are popular with all age groups – 75% of young adults aged 16-24s, and 59% of over-65s, use these services. Nearly three-fifths of over-65s prefer a TV series to be released in the traditional manner, week by week, compared to 40% and 36% of young people aged 12-15 and 16-24 respectively.

Also according to the report, for a growing amount of people the days of being tied to the TV schedule are fading, as UK viewers take advantage of being able to watch whenever, wherever they like. More than a third of people watch TV on the move – while on holiday (24%), while commuting (16%) or even in the pub (7%). Just over a half of people (51%) watch TV in their bedroom, while others watch in the kitchen (16%), the garden (9%) or the bathroom (9%).

Yet wherever people are watching, it seems that they are increasingly doing so on their own. A fifth of adults say they watch TV alone every day, and almost nine tenths watch programmes alone at least once a week. A third of people say members of their household sit together, in the same room, watching different programmes on separate screens. Yet, despite all of this, 90% of people watch live TV every week, and family viewing is still an integral part of family life. Three tenths of adults say their family still watches the same programmes or films together every day, while 70% do so at least once a week. Just over two-thirds say watching TV can bring the whole family together for a shared viewing experience.

Commenting on the Communications Market Report 2017, Lindsey Fussell, consumer group director at Ofcom, said: “Technology has revolutionised the way we watch TV. The days of waiting a week for the next episode are largely gone, with people finding it hard to resist watching multiple episodes around the house or on the move. But live television still has a special draw, and the power to bring the whole family together in a common experience.”