Hulu users emerge as SVOD community most likely to drop legacy pay-TV | VOD | News | Rapid TV News
By continuing to use this site you consent to the use of cookies on your device as described in our privacy policy unless you have disabled them. You can change your cookie settings at any time but parts of our site will not function correctly without them. [Close] 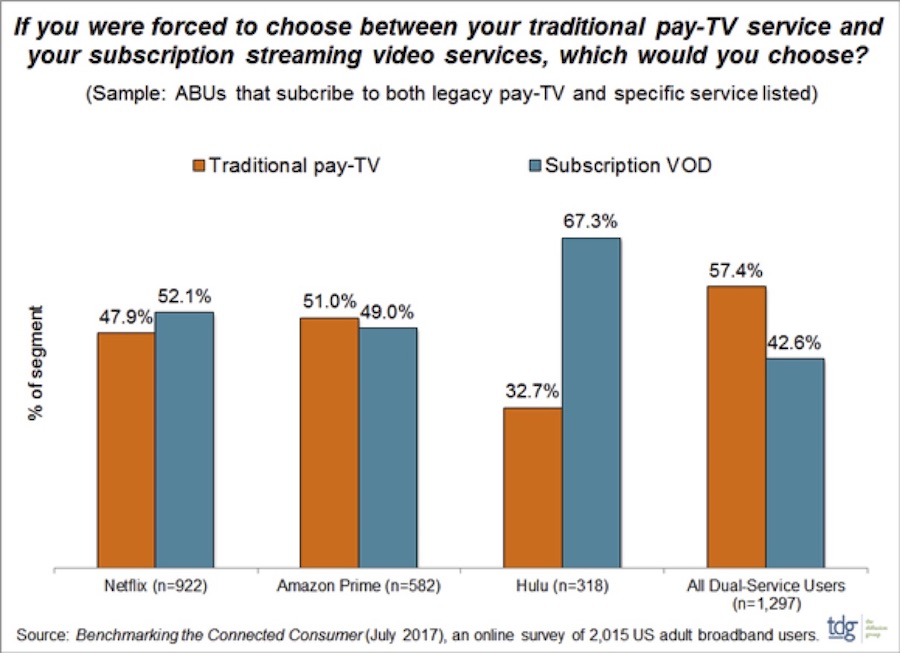 Research from The Diffusion Group has found hints that when it comes to TV, not films, Hulu users are more likely than their subscription video-on-demand peers to abandon traditional TV for streaming options the service provides.

TDG inferred form the data that given this level of brand loyalty, Hulu could have a leg up when it comes to converting its SVOD users to Hulu Live TV subscribers. “This variance was a bit unexpected,” noted TDG president and principal analyst, Michael Greeson.

“One would be forgiven for thinking that Netflix dual-service users would be the segment most likely to stick with their streaming services. Given the reach of the service (nearly 100 million viewers versus Hulu's 47 million) and the relative strength of the Netflix brand, it is not unreasonable to assume that the bond between Netflix and its subscribers would lead to higher numbers. Keep in mind that Hulu is a very different service than Netflix or Amazon Prime with broadcast and cable TV shows front and centre in its offerings with movies playing a secondary role. This makes it a better substitute for live legacy pay-TV than Netflix or Amazon Prime.”

That said, the analyst cautioned in its report that the Hulu stickiness phenomenon much depends on whether it is due to a preference for watching TV shows on-demand versus live, or due to a branded quality of experience above and beyond on-demand functionality. If more the former, TDG warned that converting SVOD users to live TV subscribers will prove difficult for Hulu. If more the latter, the analyst believes that the chances of conversion are much higher; especially if Hulu can execute a level of integration between live and on-demand that exceeds both incumbent and virtual multi-channel video programming distributors (MVPDs).
Tweet