Cord nevers, cord-cutters show big video habit differences | Media Analysis | Business | News | Rapid TV News
By continuing to use this site you consent to the use of cookies on your device as described in our privacy policy unless you have disabled them. You can change your cookie settings at any time but parts of our site will not function correctly without them. [Close]

The difference between TV cord-cutters (defined as viewers who eliminated their standard TV subscription) and cord-nevers (people who have never paid for a traditional TV connection) can be stark, for all of their similarities. 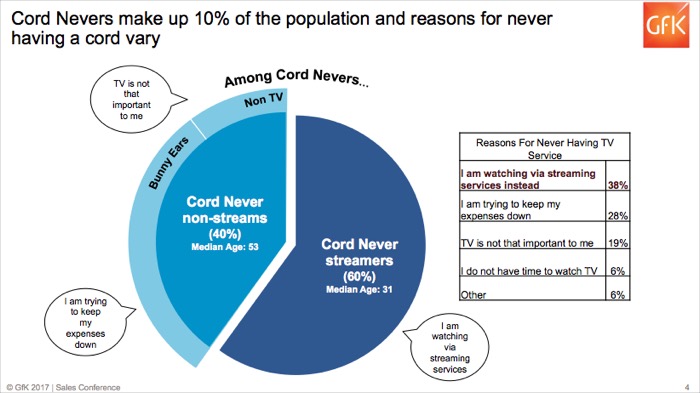 That’s the word from the GfK MRI Cord Evolution study, which found that what they watch tends to be the same: Both groups are big fans of shows on Netflix. All ten of the favourite streaming-only shows of cutters are on Netflix, compared to seven shows preferred by nevers, whose other three shows are on Amazon or Hulu. The Netflix original Orange Is the New Black is No 1 for both groups.

However, differences emerge from there. When it comes to platform choices, Netflix isn’t the only game. It remains the top streaming service among cutters, with 57% of respondents saying they have used the service in the past year. But half (50%) said they had used YouTube as well, and 37% have used Amazon. Nevers on the other hand prefer YouTube (46%), followed by Netflix (39%) and Amazon (25%).

Neither group has ruled out opting for a traditional pay TV service in the future, as their satisfaction with their current TV access situation leaves much room for improvement. The data shows that only 60% of nevers are ‘very satisfied’ with their current TV access, with over one-quarter (27%) saying they intend to subscribe to a traditional TV service in the next six months. Half of cutters are dissatisfied, but just about fifth (22%) said they would go back to traditional TV.

“Cord-nevers and cord-cutters bring very different histories and expectations to viewing,” said Karen Ramspacher, GfK researcher, commenting on the MRI Cord Evolution study. “Both groups still have strong allegiance to TV sets and traditional programming models, but they clearly have different viewing tastes, and even diverge on their perceptions of what TV actually is. As millennials get older, we can look for these populations to transform and perhaps grow more similar, while Gen Z will begin to shape the Cord Never group more and more.”