Subscription video-on-demand to reach 17.27MN MENA homes by 2022 | Media Analysis | Business | News | Rapid TV News
By continuing to use this site you consent to the use of cookies on your device as described in our privacy policy unless you have disabled them. You can change your cookie settings at any time but parts of our site will not function correctly without them. [Close] 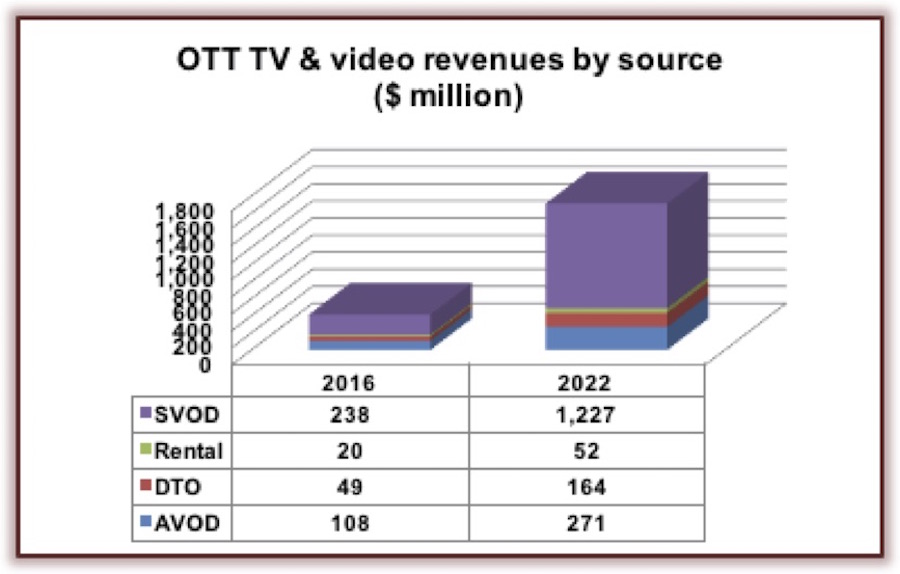 Revenues from subscription video-on-demand (SVOD) services in the Middle East and North Africa (MENA) will reach US$1.23 billion by 2022, up from almost $1 billion in 2016, according to new research.

Digital TV Research also estimates 17.27 million homes will receive SVOD services by 2022, up from the figure of 3.74 million recorded at the end of 2016 – with Turkey accounting for the lion’s share of the video streaming subscriptions.

The analysts forecast that Netflix will be the largest pan-regional SVOD platform by 2022, with an expected 3.26 million paying subscribers – five times the 2016 total, while Icflix will cross two million subscribers by 2022 – four times its total in 2016. Starz Play Arabia will add a further 1.60 million subscribers, and Iflix will have attracted 695,000 subscriptions by 2022 in six of the eight countries it operates in MENA, covered by the study.

“A handful of mobile operators such as Orange, Zain, Ooredoo, Etisalat and Vodafone have assets across several countries. SVOD platforms can gain considerable economies of scale by signing distribution deals with mobile operators. Deals between mobile operators and SVOD platforms are already prevalent in the Middle East and North Africa – offering an example for the rest of the world to follow,” said Simon Murray, principal analyst at Digital TV Research.