OTT boosts Mexican video industry | OTT | News | Rapid TV News
By continuing to use this site you consent to the use of cookies on your device as described in our privacy policy unless you have disabled them. You can change your cookie settings at any time but parts of our site will not function correctly without them. [Close]

Looking at the pay-video market as a whole, including both OTT and pay-TV, a report by The Competitive Intelligence Unit (CIU) has revealed that streaming platforms are Mexico’s fastest growing players, even nearing cable TV’s share. 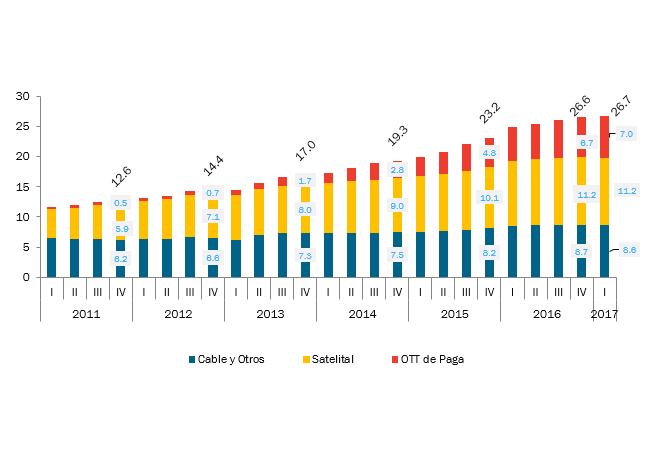 However, a big gap is found when it comes to revenues. According to the report, the market neared an income of $1.5 billion in the quarter, 10.3% of was generated by OTT platforms. Satellite TV contributed with 59.2% and cable TV with 30.5%.

“This is attributable to OTT’s monthly prices, which are cheaper than the most basic pre-paid satellite TV packages,” said the analysis. “On average, OTT’s monthly subscription is $6.80, while basic pay-TV packages are $11.30.”

“Pay-TV operators have deployed new strategies to deliver video-on-demand (VOD) content in order to face OTT’s competition,” continued Radames Camargo. “With an increasing offering and the unstoppable growth of OTT services, the market will continue to grow in the future, both in income and subscriptions.”
Tweet