Nearly three-fifths of US broadband households take Netflix, Amazon, Hulu | VOD | News | Rapid TV News
By continuing to use this site you consent to the use of cookies on your device as described in our privacy policy unless you have disabled them. You can change your cookie settings at any time but parts of our site will not function correctly without them. [Close] 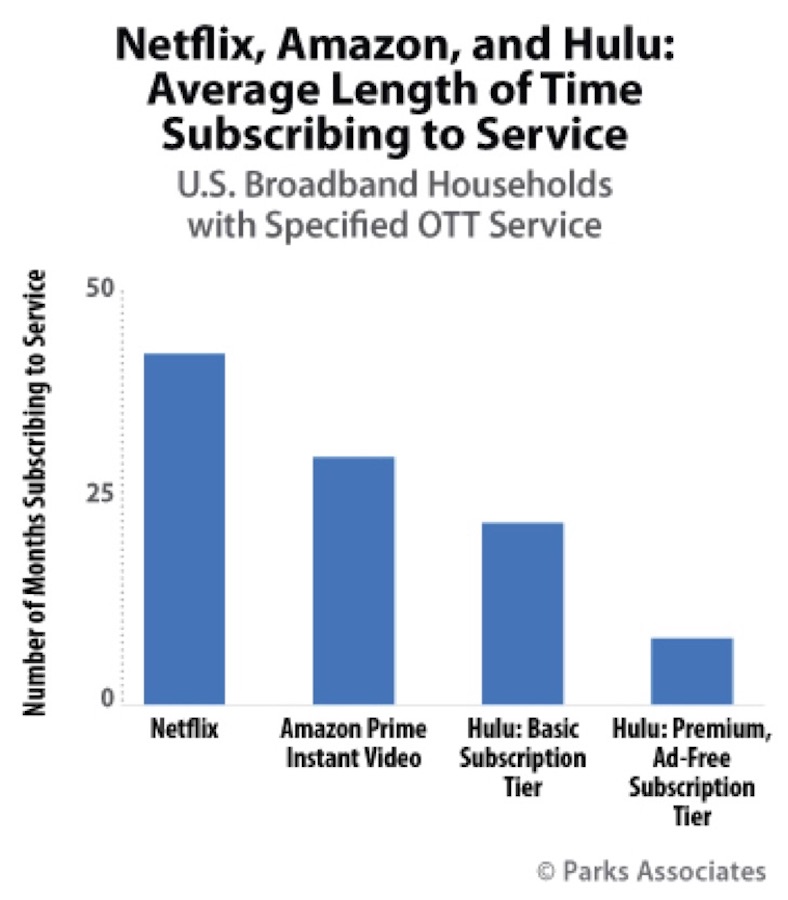 In an indication of just how rapidly diffuse the leading subscription video-on-demand (SVOD) services are getting in the US, Parks Associates revealed today that 59% of US broadband households subscribe to Netflix, Amazon or Hulu.

So dominant are the top three SVOD services, according to the analyst’s OTT Video Market Tracker, that just a paltry 6% of US broadband households subscribe to an offering other than one of the top three, while just 3% subscribe to one or more sports OTT video service, such as MLB.TV, NFL Game Pass, NBA League Pass or WWE Network.

The study also showed that almost two-thirds (65%) of US broadband households subscribe to at least one OTT video service. However, the firm notes that household penetration is slowing and that growth areas are in multi-subscription households and older consumers adopting services.

Examples of these niche services cited by Parks in the OTT Video Market Tracker includes Crunchyroll and WWE Network are that have grown strong customer bases while remaining unique from Netflix, Amazon, and Hulu. Crunchyroll reported more than one million global subscribers as of February 2017, while WWE Network had 1.95 million global subscribers following WrestleMania 33 in April 2017.

“US consumers are not taking solely a Netflix, Amazon or Hulu subscription. Many are shopping around and trialling new services to get access to interesting content unavailable through the big services,” added Parks Associates senior director of research Brett Sappington. “Interest and viewership in OTT video services have led to an increase in total subscriptions since 2015, including an increase in households subscribing to two, three, or even four or more services. All this translates into more money being spent by consumers and more opportunity for niche content services to capture revenues. Crunchyroll is a great example of a niche OTT video service that understands effective niche-oriented competition. [It understands] its target segment extremely well, and they have crafted an experience that caters to that audience, including forums and events to foster a user community.”
Tweet