Over half of US broadband households stream to TVs | Media Analysis | Business | News | Rapid TV News
By continuing to use this site you consent to the use of cookies on your device as described in our privacy policy unless you have disabled them. You can change your cookie settings at any time but parts of our site will not function correctly without them. [Close]

Over half of US broadband households stream to TVs

There is no doubt that streaming has caused a fundamental shift in TV viewing, and research from Parks Associates argues that the industry is well past a tipping point. 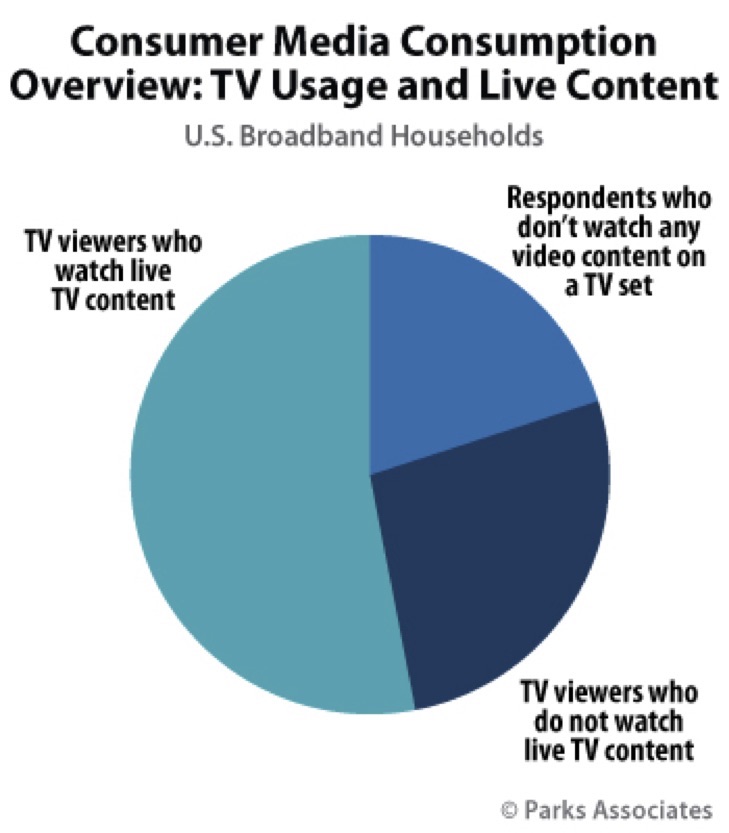 In addition to finding that more than half of US broadband households now watch Internet video on a television screen, Parks revealed that 72% of non-pay-TV subscribers subscribe to an over-the-top (OTT) video service, which is their primary source for content, while 49% of broadband households in the US subscribe to Netflix, by far the market leader. Much of this content is now streamed via the large screen.

The research also found that well over 60% of households now subscribe to one or more OTT video services, and one-third subscribe to two or more services. Indeed, 88% of computer-based viewing is from non-linear sources.

"For years, the television has been the stronghold for the traditional TV industry," said Brett Sappington, senior director of research, Parks Associates. "Today, more televisions are connected to the Internet than ever, either directly or through connected devices like game consoles or streaming media players, such as Roku or Apple TV ... The market has fundamentally changed.

“Broadcasters, cable networks, and pay-TV providers have noted a decline in viewership for live, linear TV channels and a corresponding increase in on-demand viewing. The abundance of alternatives is clearly impacting the traditional TV industry. Traditional players have taken notice and many have launched their own OTT offerings in an effort to get out in front of the shift.”