Quality control becomes an issue as Netflix cancellations continue | Media Investment | Business | News | Rapid TV News
By continuing to use this site you consent to the use of cookies on your device as described in our privacy policy unless you have disabled them. You can change your cookie settings at any time but parts of our site will not function correctly without them. [Close]

Netflix has cancelled a rash of series of late, including The Get Down, Bloodline, Sense 8 and Marco Polo, among others. CEO Reed Hastings recently warned that there could be more to come, given that being able to decide to cut one’s losses is an important piece of innovation. 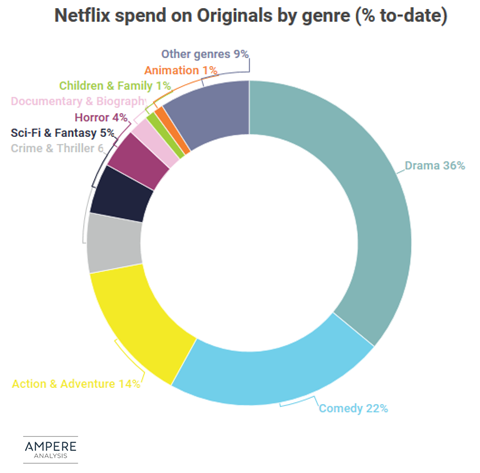 One research firm however said the move is meant to tighten up a roster that is falling in quality. Moreover, the abandonment doesn’t come cheap: The Get Down only had one season at cancellation time. It covers the early days of hip-hop dancing, created by luxe director Baz Luhrmann, and is reportedly Netflix’s largest content pay-out to date, costing $120 million.

Sense8 was created by the Wachowskis, of The Matrix fame, and reportedly cost $99 million per season for its two-season run.

“You should have more things that don’t work out, you have to get more aggressive,” he said, speaking at Recode’s Code Conference earlier this year. “The drive toward conformity as you grow is more substantial. As a leader, you want to drive people to take more risks.”

He spun his comments into a bit of a humblebrag: “Our hit ratio is way too high right now,” he said. “I’m always pushing the content team. We have to take more risk. You have to try more crazy things, because we should have a higher cancel rate overall.”

However, research firm Ampere believes that the recent spate of cancellations is actually linked to efforts to reverse the declining average quality of its titles—to achieve the proverbial quality over quantity.

Since 2015, Netflix's catalogue of Originals has dropped in quality by roughly 4%, as estimated using Ampere's quality measure. The shows which Netflix has cancelled have all fallen below a cost vs interest threshold. Ampere has calculated a simple cost-effectiveness ratio for Netflix Originals (weighing up show cost relative to the volume of quality-weighted IMDB reviews) which illustrates that Netflix's cancelled shows (with the single exception of Bloodline) all fall below the levels of cost-effectiveness achieved by its renewed titles.

“Netflix has been placing its bets in a few areas,” the firm said. “By Ampere's estimates, over a third of the company's expenditure on Originals to-date has been for drama titles, and nearly a quarter of the company's Original spend has been on comedy series and stand-up shows. Action and adventure, crime and thrillers, science fiction and horror are also significant areas of investment.”