Nearly half of connected TV device growth from smart TVs by 2020 | Media Analysis | Business | News | Rapid TV News
By continuing to use this site you consent to the use of cookies on your device as described in our privacy policy unless you have disabled them. You can change your cookie settings at any time but parts of our site will not function correctly without them. [Close]

By the end of 2020 there will be 260 million installed media devices attached to the internet and able to deliver apps to TVs, according to research from NPD Connected Intelligence. 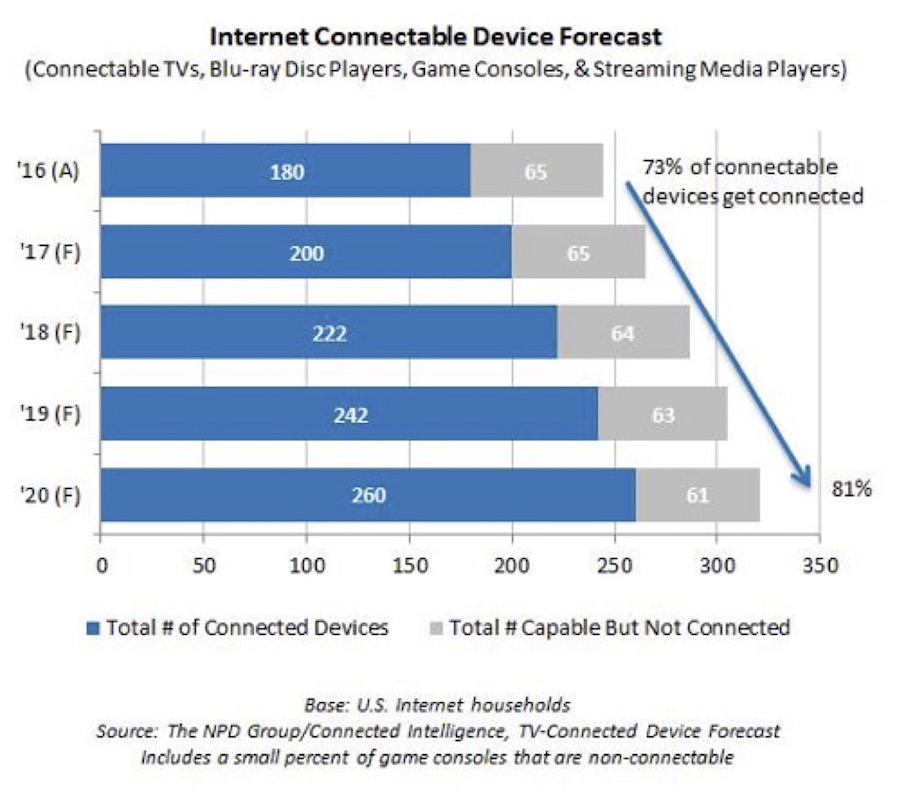 If realised this would represent 31% growth for connected TV devices with smart TVs will driving 48% of the increase, with streaming media players contribute 31%. The forecast also predicts that by 2018, and through the end of the forecast period, household penetration of smart TVs will achieve relative parity with streaming media players as platforms delivering apps to TVs.

NPD also forecasts that the rate of attaching connectable-TV devices will increase from 73% in 2016 to 81% of installed units by 2020. This it says will eventually lead consumers to choose a preferred device, and result in diminished use for other devices. From January 2013 through January 2017, NPD observed that usage of installed internet-capable TVs to access online content increased from 30% to 55%, demonstrating it suggests growing consumer interest in streaming video.

“Sales of smart TVs and continued growth in streaming video will contribute to the increase of installed internet-connected TVs,” commented NPD Connected Intelligence executive director, industry analyst John Buffone. “Additionally, 4K mass market adoption plays an important role, as nearly all 4KTVs are internet capable. All trends point to smart TVs and streaming media players driving the majority of growth in TV-connected devices. When you compound the increased usage for streaming video, it points to further dominance of these platforms, as they provide the premium content and ease of use consumers demand.”